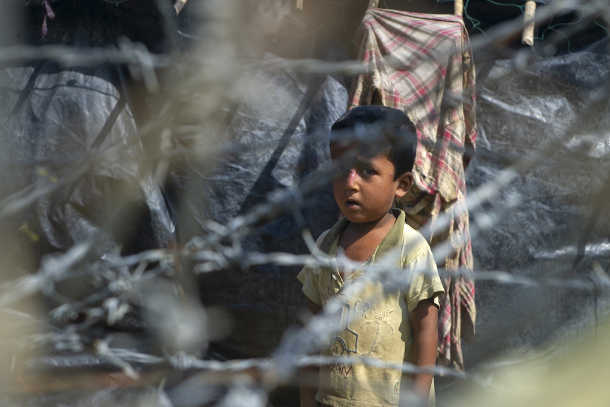 Rohingya refugees gather near a fence in "no man's land" between Myanmar and Bangladesh as seen from Maungdaw, Rakhine State, on June 29. More than 700,000 Rohingya fled an army crackdown in August 2017 that the U.S. and U.N. have called ethnic cleansing. (Photo by Phyo Hein Kyaw/AFP)

Rights groups say Myanmar's new commission to probe abuses against the Rohingya in Rakhine State is the start of a cover-up and designed to muddy the waters rather than hold perpetrators accountable for crimes.

Phil Robertson, deputy Asia director for Human Rights Watch, said Myanmar is still playing games and trying to divert attention from the forthcoming fact-finding mission mandated by the United Nations Human Rights Council report that will be presented in September in Geneva.

"This all looks like a new phase in Myanmar's efforts to obstruct international justice for Tatmadaw [military] and police commanders and troops who committed ethnic cleansing and crimes against humanity against the Rohingya in northern Rakhine," Robertson told ucanews.com.

Myanmar has established a commission with two international and two local members to be led by Rosario Manalo, a former deputy foreign minister of the Philippines and a representative of the Philippines to the U.N. Convention on the Elimination of all Forms of Discrimination against Women.

Kenzo Oshima, a former permanent representative to the U.N. for Japan, is another member of the commission. The two locals are Mya Thein, a former chair of Myanmar's Constitutional Tribunal, and Aung Tun Thet, a former senior official at UNICEF.

"Myanmar has established an independent commission of inquiry as part of its national initiative to address reconciliation, peace, stability and development in Rakhine," said the president's office announcement on July 30.

Robertson said Manolo has played the "go along to get along" game in ASEAN for years, especially on the ASEAN Intergovernmental Commission on Human Rights, where he claimed she was more interested in playing politics than protecting rights.

She was the primary mover behind an ill-advised campaign for ASEAN to draft its own human rights conventions, which would have undermined international human rights standards in a fundamental way, he said.

Robertson said Aung Tun Thet has proved to be clearly biased and is entirely inappropriate for this role. He served on the 2016 national investigation that refuted the U.N. Human Rights Council's report in February 2016. He has frequently spoken out to deny that any ethnic cleansing or crimes have taken place in Rakhine State, according to Robertson.

More than 700,000 Rohingya were forced to flee their homes in northern Rakhine after Myanmar's military crackdown followed attacks by the Arakan Rohingya Salvation Army on police posts last August.

Aye Lwin, a Muslim leader and a member of the Kofi Annan-led Rakhine Advisory Commission, said the commission is a positive step in tackling rights abuses in Rakhine.

"Whenever problems occur, we need commissions to solve them. But it is early to evaluate the performance of this commission," Aye Lwin told ucanews.com.

He said Annan's commission had given suggestions and the government is implementing some of its recommendations, especially for road and development projects.

"But many things need to be implemented, especially [to change] attitudes and distrust between the two communities and tackling hate speech and fake news," Aye Lwin said.

In June, the Myanmar government's proposal to establish a commission with international members drew strong criticism from military lawmakers, the military-linked Union Solidarity and Development Party and Rakhine politicians who claimed it would affect Myanmar's sovereignty.

Pe Than, a Lower-House MP for the Arakan National Party in Rakhine, said the government was attempting to reduce pressure from the international community.

He questioned how much mandate commission members would have to investigate rights abuses. "How will Myanmar's military collaborate with probing allegations of its abuses?" he asked.