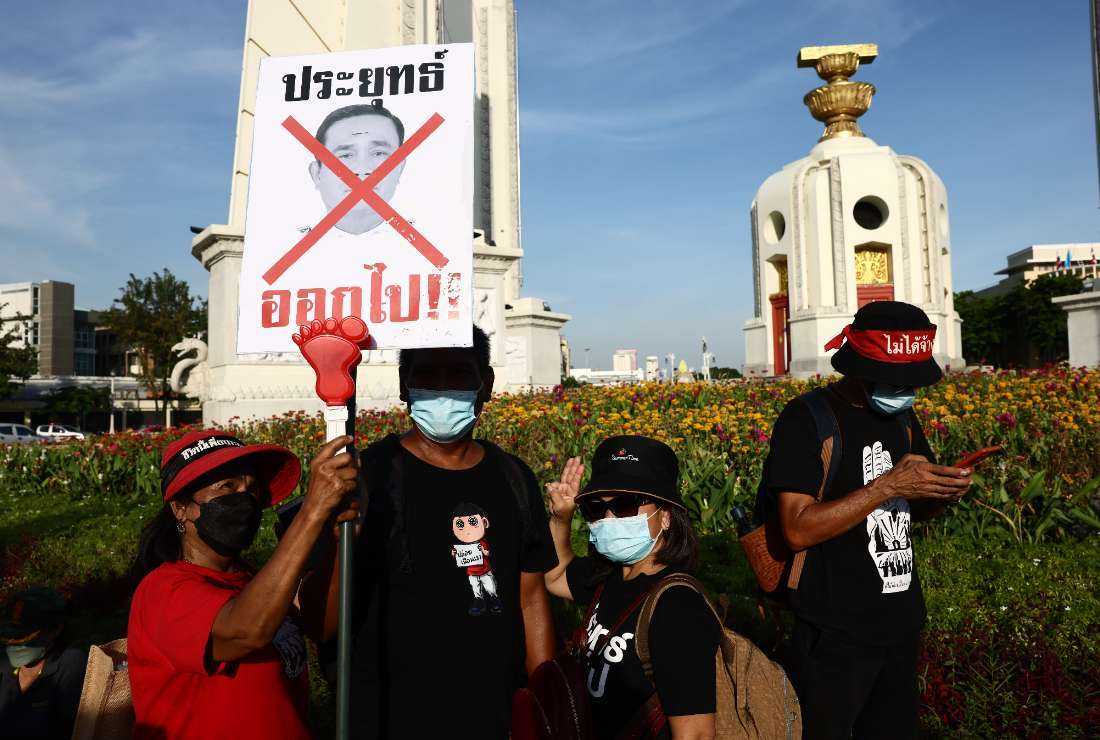 A protester holds up a placard with a crossed-out image of Thailand's Prime Minister Prayut Chan-O-Cha at a demonstration at the Democracy Monument in Bangkok on Aug. 23 (Photo: AFP)

Thailand's Constitutional Court on Wednesday suspended Prime Minister Prayut Chan-O-Cha from office while it considers a legal challenge that could see him thrown out months before an expected general election.

The court agreed unanimously to hear a case brought by opposition parties who argue Prayut has reached the end of his eight-year term limit as prime minister.

Judges also agreed by five votes to four to suspend Prayut from office until the case is decided, the court said in a statement.

"The court considered the petition and supporting documents and deems the facts according to the request indicate reasonable grounds to suspect that there is a case as requested," the statement said.

"Thus, a majority vote (five against four) for (Prayut) to be suspended as prime minister, effective August 24, 2022, until the court issues a verdict."

Prayut, who will continue in his role as defense minister, has 15 days to respond to the case against him.

Prawit Wongsuwan, one of Prayut's deputies and another former army chief, will take over as caretaker prime minister while the case is decided.

"The current cabinet will continue its duty as normal because General Prayut has not been ousted from his post, only suspended from duty," said Wissanu Krea-ngam, another deputy prime minister.

Pita Limjaroenrat, leader of the opposition Move Forward Party, which was among those that backed the petition, said the country needed fresh leadership.

"It is like rowing a boat round the bathtub, going from General Prayut to General Prawit," Pita told reporters at parliament.

It is not the first time the Constitutional Court has played a role in Thai politics -- it cancelled the results of general elections in 2006 and 2014.

The kingdom's 2017 constitution bars the prime minister from serving more than eight years in total, and opposition parties say Prayut, who took power in a 2014 coup, has reached the limit.

Several hundred anti-government protesters rallied at Bangkok's Democracy Monument on Tuesday ahead of the court ruling and further demonstrations are planned.

Anucha Burachaisri, a spokesman for the prime minister's office, urged "all groups" to "respect the results of the court's hearings and avoid criticising the performance of the court".

Supporters of the 68-year-old leader argue that the clock on his rule began when the 2017 constitution was instituted, or even after the 2019 general election.

If the court follows this logic, Prayut could technically continue to serve until 2025 or 2027 -- if he wins a general election due by March.

He headed the junta regime for five years and continued as prime minister after the 2019 national elections.

The stern, blunt-speaking Prayut has found himself increasingly out of favour with voters. A recent opinion poll found two-thirds of respondents wanted him to vacate office immediately.

Under Prayut's watch, the kingdom registered its worst economic performance in 30 years and his government has also faced criticism over its handling of the pandemic.

Youth-led, pro-democracy rallies in Bangkok in 2020 attracted tens of thousands of people at their peak, and a key demand of the movement was for Prayut to resign.

On Wednesday, police had placed shipping containers on some streets near government buildings in anticipation of fresh protests.