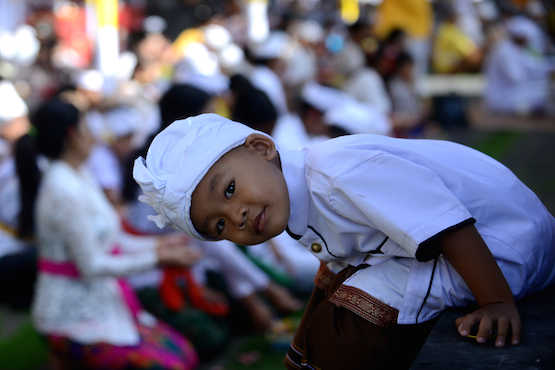 The recognition of native faiths by Indonesia's Constitutional Court has enhanced religious rights.

However, the government needs to clamp down on intolerant groups and scrap an abused anti-blasphemy law in order to achieve genuine religious freedom.

This has been the case even though Muslim-majority Indonesia prides itself on acceptance of religious and ethnic diversity.

The People's Consultative Assembly in 1978 declared native faiths to be part of "traditions and culture" rather than religions as such.

An overwhelming majority of citizens have been required to name an officially recognized religion on their personal identification (ID) cards and civil marriage certificates.

Indonesians are obliged to get an ID card at the age of 17 that displays personal data, including each person's religious affiliation.

But as aliran kepercayaan faiths were not recognized as religions, followers were told to leave blank the "religion column" on both ID and family registration cards.

Without religious identity being included on such documents, they faced difficulties in obtaining government jobs and services.

Followers of the traditional Wiwitan faith in West Java, for example, venerate the power of nature and ancestral spirits.

According to the Ministry of Education and Culture, in 2016 there were some 1,200 native faith groups in Indonesia with about 12 million followers.

This constituted almost 5 percent of the country's population of more than 260 million.

Some followers of native religions pretend to be members of official religions, or give up their faith altogether, in order to access government services.

However, earlier this month judges of the Constitutional Court declared as unconstitutional the requirement for native faith followers to leave blank the "religion column" on IDs and family registration cards.

The state is henceforth obliged to protect traditional faith adherents and their right to follow as well as propagate their teachings.

One consequence of the Constitutional Court ruling is likely to be a change in the country's religious statistics.

Some Hindu leaders have already expressed concern that it will reduce the number of recognized Hindus.

This is because many native faith followers are currently registered with the Ministry of Education and Culture as Hindus.

With their existence now recognized, we can expect more native faith practitioners to register with the government.

The Constitutional Court ruling is very much in line with the Indonesian Government's commitment to promote religious freedom.

The challenge, however, is to ensure that religious minorities are able practice their faiths without undue interference.

There have been cases of commemorative Christian church events being called off because of threats of violence.

There have also been violent protests against the building of new churches and even a case where a Christmas service was disrupted.

The Setara Institute, a non-governmental organization that champions democracy and peace, recorded a total of 270 cases of religious intolerance in 2016, compared to 236 in 2015.

Sadly, government entities have engaged in acts of intolerance through use of the anti-blasphemy law and related regulations.

According to Setara Institute, more than half of religious intolerance cases in 2016 involved government entities, including local governments and police officers.

Promulgated in 1965, the blasphemy law was designed to protect the six recognized religions.

However, Christians and members of other religions have in some cases have been accused of blasphemy for partisan political reasons.

Former Jakarta Governor Basuki Tjahaja Purnama, an ethnic Chinese Christian, was tried under the law and sentenced to jail for two years early this year after citing a Quran verse in a speech in Jakarta.

And in 2016, authorities used the anti-blasphemy law against the Gafatar religious group, which has Islamic roots and purportedly 50,000 members in Indonesia.

The law was employed to evict more than 7,000 Gafatar members from their homes in West Kalimantan after Muslim leaders judged that their beliefs deviated from mainstream Islam.

Leaders of Ahmadiyyah, another Islamic community, have been told to cease all religious activities in public or face persecution, also for deviating from traditional Islamic teachings.

Such cases underscore the fact that Indonesia still has a long way to go to enshrine religious freedoms, notwithstanding the welcome recognition of native faiths.

Kanis Dursin is a freelance journalist based in Jakarta