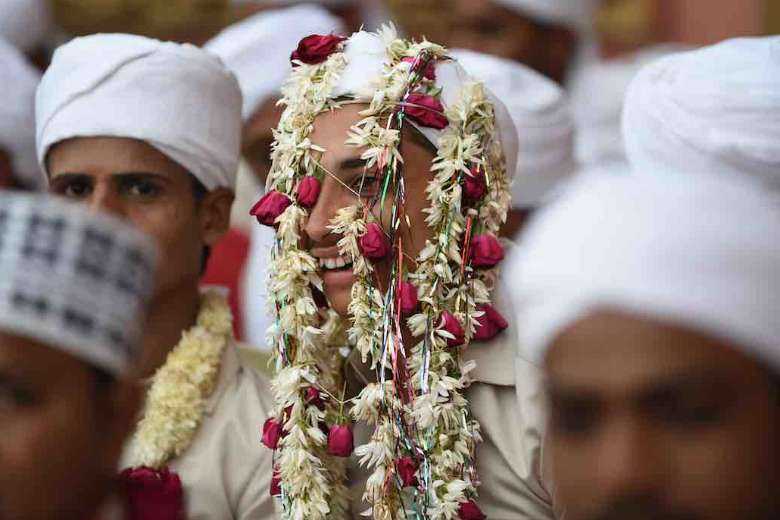 An Indian Muslim groom, seen covered with garlands, looks on as he participates in a mass marriage in Ahmedabad on Dec. 3, 2018. Some 65 Muslim couples were wedded in the ceremony. (Photo: Sam Panthaky)

Delhi High Court has asked the Indian government to legislate a uniform personal law to govern all citizens regardless of their religion — a move Christians and Muslims have been opposing for decades.

Justice Prathiba M. Singh said on July 9 that the constitution promulgated in 1950 expressed a hope that the state should secure for its citizens a uniform civil code. It “ought not to remain a mere hope," she said.

India currently has religion-based personal laws to govern marriage, divorce and succession respecting the customs and practices of various religions.

Those who oppose a common civil code, which includes Christian and Muslim religious leaders, say a unified personal code would threaten religious diversity in a country of 1.3 billion people following various religions.

But Justice Singh said India’s Supreme Court, the top court in the country, in 1985 had directed the federal government to take steps toward a uniform personal law.

More than three decades later, “it is unclear as to what steps have been taken in this regard till date,” she said.

Her observations came while hearing a petition questioning the applicability of the Hindu Marriage Act of 1955 in respect to a couple belonging to the Meenas caste group, who are dominant in Rajasthan and some northern states.

The applicant's husband argued that the law does not apply to them as they are members of a government-notified tribe in Rajasthan.

Justice Singh said Indian courts have been repeatedly confronted with conflicts arising out of personal laws. Persons of various communities, castes and religions who forge marital bonds struggle with such conflicts, she noted.

A uniform civil code can safeguard and protect personal rights and end citizens’ struggles that arise out of “conflicts and contradictions in various personal laws,” the judge said.

However, a uniform civil code has been a political hot potato for decades, with Prime Minister Narendra Modi's Bharatiya Janata Party (BJP) pushing for it against the opposition of Congress and other opposition parties.

The Polit Bureau of the Communist Party of India (Marxist) said the move for a uniform civil code shows the "communal politics practiced by the Hindutva platform and insecurity among minorities, particularly the Muslim community.” Such a code would have the reverse effect and would not help national integration, it said.

India’s Law Commission in 2018, in response to a reference made by the Ministry of Law and Justice in June 2016, said a uniform civil code is neither necessary nor desirable, according to Christian leader A.C. Michael.

“I think what Delhi High Court is trying to tell the government is to deal with laws that are discriminatory rather than the imposition of rules that would be averse to fundamental rights," he said.

Congress party leaders like M. VeerappaMoily, a former federal minister and chief minister of Karnataka state, believe that a uniform civil code “is next to impossible in a vast a country like India with so many communities and tribal groups, each one following their own social norms."

BJP spokesman Sambit Patra said the uniform civil code should not be seen as a Hindu-Muslim communal divide.

"Until 1955, even Hindu men were allowed to have multiple wives, and only when the Hindu Code came did polygamy among Hindus stop. This was a reform among Hindus by law,” he said.

Patra was indirectly saying that the code aims to stop polygamy among Muslims, which leads to oppression and victimization of women

The uniform civil code also aims to stop "gender discrimination" so that dignity and confidence are instilled among women, especially Muslims.

Patra was indirectly saying that the code aims to stop polygamy among Muslims, which leads to oppression and victimization of women.

BJP leaders point out that while Hindu and Christian women cannot marry before the age of 18, the Shariat law gives space to Muslim women to get married even at the age of 15.

Sharia (Islamic) laws) are not codified and solely based on religious scriptures.

The Supreme Court first recommended a uniform civil code in India in 1985.

The proposals would enforce monogamy, equal rights for sons and daughters over the inheritance of paternal property, and gender and religion-neutral laws.