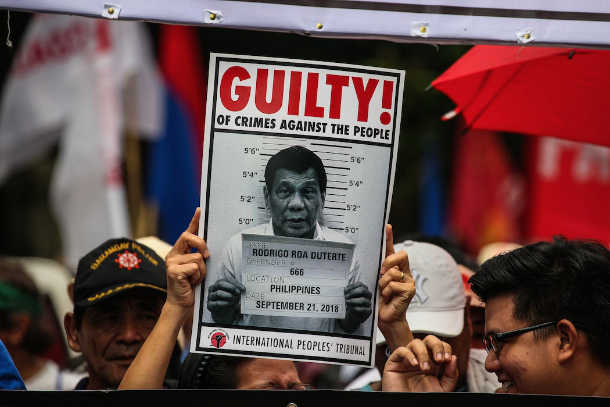 A protester holds a placard with an image of Philippine President Rodrigo Duterte during a protest in Manila on Sept. 21. (Photo by Maria Tan)

An international people's court has found Philippine President Rodrigo Duterte guilty of violating the political and economic rights of Filipinos.

While activist groups and some religious leaders welcomed the ruling by the International People's Tribunal (IPT) that convened in Belgium this week, the Manila government called the ruling a sham.

In its verdict released on Sept. 20, the tribunal — a global court organized by lawyers' associations and rights groups — found Duterte "guilty of crimes against the Filipino people."

The tribunal was among several organized by civil society organizations and private individuals to highlight pressing issues in different countries.

The court's verdict will be submitted to the International Criminal Court, the European Parliament and the United Nations Human Rights Council.

Duterte's spokesman Harry Roque, however, called the tribunal "sham proceedings" and "propaganda by the left." He said the verdict was "nothing because the proceedings were not official.”

In its verdict, the IPT said it found the defendants "guilty of all charges ... which account for their accountability for crimes against humanity, war crimes, and violations of law and legal instruments."

Religious leaders in Mindanao hailed the verdict as a "victory for justice."

Father Rey Carvin Ondap, executive director of the Passionist Center for Justice, Peace and Integrity of Creation, said it "shows that those who are hopeless and hapless are now being heard."

"I salute those who gave their testimonies for their courage," said the priest.

Families of human rights abuse victims and activist groups told the tribunal about extrajudicial killings linked to the government's anti-narcotics war and counterinsurgency operations, detention and political persecution of dissenters, abuses during the anti-terror war in Marawi in 2017, the declaration of martial law in Mindanao and attacks on journalists.

Among the 31 "witnesses" who testified was Australian missionary nun Patricia Fox, who claimed the Duterte administration curtailed her rights when she was ordered to be deported for alleged involvement in partisan political activities.

Father Amado Picardal, a Redemptorist priest and a staunch critic of Duterte's bloody war against drugs, said the tribunal's ruling adds to the international condemnation of the "brutal regime."

"For whatever it is worth, I hope this will spur the International Criminal Court to proceed with its investigation into extrajudicial killings and mass murder in the Philippines," he said.

Sultan Hamidullah Atar of Marawi, who testified before the tribunal for alleged atrocities committed by the military in Marawi, said the five-month conflict last year could have been shortened if Muslim leaders had been allowed to negotiate with Islamic State-inspired fighters.

The Muslim leader said Duterte's martial law declaration across Mindanao "violated the principles of proportionality in international humanitarian law as it paved the way for the destruction of our cultural sites and worship areas."

Human rights group Karapatan and the National Union of People's Lawyers maintained that the tribunal was a legitimate venue for voicing redress and grievances.

In a statement, the lawyers' group said the tribunal "follows and respects due process where the defendants are duly notified and given adequate opportunity to participate and defend themselves."

The group said the tribunal's procedures are consistent with "universal standards of evidence" and the court was convened by "prestigious and respected international lawyers' organizations and presided over by a panel of eminent jurors from different disciplines."