Council of cardinals gets down to business 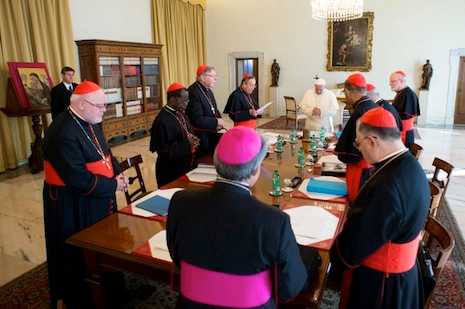 By Lizzy Davies for The Guardian

The eight cardinals picked by Pope Francis to advise him on reform of the Roman curia and the governance of the Catholic church are preparing to meet the pontiff for the first time on Tuesday[October 1], in an unprecedented three-day meeting likened to a "papal G8".

In a move already billed as a potentially critical moment for Francis's six-month-old papacy, the multinational group of "outsider" cardinals is flying in to Rome from all corners of the globe to present him with ideas for how to reform the Vatican and the church worldwide.

The panel – officially named the Council of Cardinals – was hailed as a revolutionary move when it was formed in April shortly after Francis's election. One observer said that, in its apparent embrace of a more collegial style of church governance, it was the "most important step in the history of the church for the past 10 centuries".

However, the pope's spokesman, Federico Lombardi, on Monday stressed that the arrangement had its limits. Although the cardinals would be called on to advise the pope and would give the church another "means of consultation", there was no question about who would be having the final say.

"A council advises, and he who decides is the pope," he said.