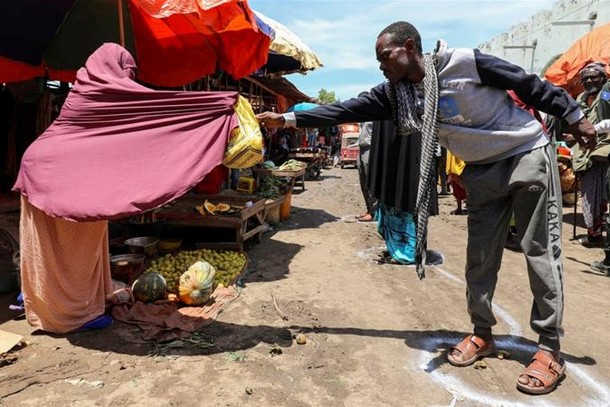 A Somali woman sells fruits to a customer standing at a social distancing marker in late April in Mogadishu, Somalia, during the COVID-19 pandemic. (Photo: Feisal Omar, Reuters / Aljazeera)

Corruption in Somalia complicates the battle against the spread of Covid-19 in the Horn of Africa country, a representative of Caritas said.

"Cases of health materials being stolen from government hospitals" and then later seen "in shops and marketplaces have been reported in the media," she told Catholic News Service.

Alongside other Catholic humanitarian organizations, Caritas is running many projects to assist Somalis during the pandemic, Rached said. It has financed donations of medical supplies in Mogadishu, the capital, and other parts of the country, including refugee camps.

Also, the organization is working with television and radio producers to run a Covid-19 awareness campaign in Somalia, which has a population of about 15 million people, Rached said.

She noted that many people do not respect social distancing and do not wear masks.

"The problem is that we don't know the real numbers," Rached said. "The country is divided," and testing is not happening in all regions, she said, noting that in al-Shabab-controlled areas "tests are impossible."