The Church, known for imparting quality education and health care, is now mired in property disputes across the country 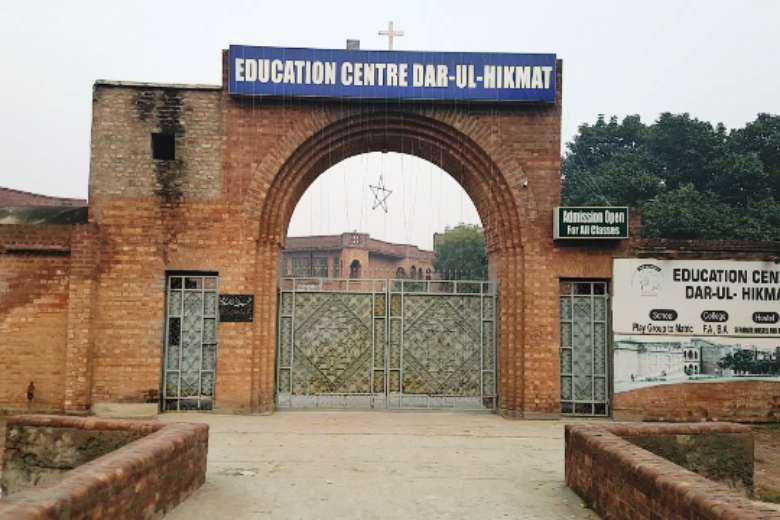 The dusty vestiges of this old school are full of cobwebs, the floors covered in saline. Empty liquor bottles are piled up near a water tank in the backyard.

Years of litigation have turned it into a ghost school.

In 2020, Christy Munir, one of its trustees and a professor emeritus at Forman’s Christian FC College, filed a complaint alleging the hijacking of the institution by Noraiz Dilawaiz, a legal adviser of Darul Hikmat hired in 2016, through fake documents.

The institution was returned to the board of directors on Jan. 8 amid tight police security as announced by Umer Sher Chattha, deputy commissioner of Lahore, on his official Facebook page.

“On the directions of PM #ImranKhanPTI district administration retrieved illegally grabbed Darul Hikmat School from a Qabza Mafia (land grabber) after three years and handed over back to the Christian community (legal owners). Land grabbing & Qabza Mafia will never be tolerated in Lahore,” he said.

The generator room is empty. The cleaning will require at least two months. Reviving the relations with donors will be a colossal challenge

The court order stated that “the school had a strength of around 2,000 students which has been reduced to 250-300 students now. It is mainly because of poor administration and misuse of funds of the trust. Dilawaiz deceitfully got issued filing certificates by preparing bogus documents.”

Community leaders are now visiting the school and celebrating the good news on social media. However, Asher Moon Bhatti, the newly installed administrator of the institute, now faces the tough challenge of restoring the building to its former status.

“Families residing in classrooms were evacuated just yesterday [Jan. 12]. All the ceiling fans, furniture, computers and even cupboards are gone. The generator room is empty. The cleaning will require at least two months. Reviving the relations with donors will be a colossal challenge,” he told UCA News.

Darul Hikmat was founded in 1987 by Dutch missionaries on a plot spread over 22,257 square meters in the southern suburbs of Youhanabad, the largest Christian settlement in Pakistan. Some land was sold to outsiders while the legal battle was still on.

The Pakistani Church is known for its charitable institutions imparting quality education. However, its reputation has been marred recently by reports of corruption, nepotism and intimidation circulating on social media.

Last year videos of hospital staff protesting unpaid wages and arguing with administrators at the Christian Hospital Taxila, also in Punjab province, made the rounds. One of the Christian doctors even filed a lawsuit against the medical board in 2020. He was issued a show-cause notice in November.

United Christian Hospital of Lahore, established in the 1960s by the Presbyterian Church, made the headlines in 2006 when its former chairman was reported to have sold 253 square meters of land for US$330,300.

The rumors on social media also pointed to encroachment and sale of its land and medical equipment besides the alleged opening of a red-light bar in the premises of an institution that pioneered open-heart surgery in Pakistan.

Volunteers are presently engaged in restoring its male ward, one of the several facilities gathering dust for years now.

Last month Reverend Javed Gill, a moderator of the Presbyterian Church of Pakistan, was arrested in a fraud case in Lahore. He had been wanted in Gujranwala city of Punjab since September but managed to get bail on Jan. 1.

A Faisalabad pastor claimed to be the moderator after he became a vice moderator in 1997. Now his brother claims to head the church. There is no control

The Presbyterian Church is in deep crisis with more than 50 property disputes registered across the country. Several of its pastors claim to be moderators and go about the business of disposing of church properties.

“A Faisalabad pastor claimed to be the moderator after he became a vice moderator in 1997. Now his brother claims to head the church. There is no control,” Majeed Abel, a Lahore-based moderator himself, told UCA News.

The Church of Pakistan, established in 1970 as a union of Anglicans, Scottish, Presbyterians, Methodists and Lutherans, is mired in a record number of disputes. Most cases are related to old titles.

For years Christian community activists have been protesting the illegal disposal of church properties while demanding the arrest of the facilitators and members of the land mafia.

Hindu temples and Sikh gurdwaras in Pakistan operate under the provincial Auqaf and Religious Affairs Department.

Churches in Punjab province are covered under federal law on minority properties while in three other provinces they require a no objection certificate from the provincial ministries of minorities’ affairs and interfaith harmony for the sale, transfer, purchase and gifting of their properties.