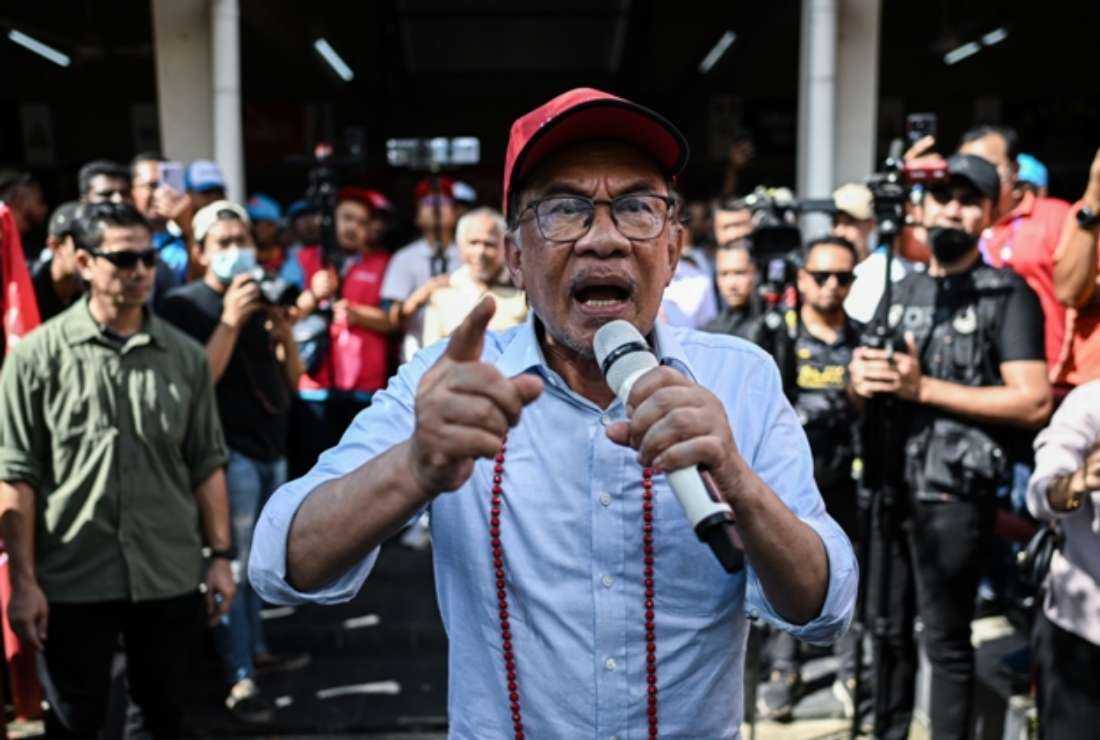 Malaysian opposition leader Anwar Ibrahim delivers a speech at a campaign rally ahead of the country's general election in Kuala Lumpur on Nov. 16. (Photo: AFP)

Malaysia’s 15th general election is slated for Nov. 19 and there are enough reasons to “vote based on your conscience” as exhorted by Bishop Anthony Bernard Paul of Melaka-Johor.

The Southeast Asian nation is plagued by cases of corruption. The country’s ex-prime minister, Najib Razak, is currently serving a 12–year jail term for his involvement in the 1MDB scandal.

The ruling government, led by Ismail Sabri Yaakob, dissolved parliament and called for snap polls last month to douse the emerging outrage at the increasing corruption at the highest level.

Another pressing issue is political instability. Malaysia has had four prime ministers during the past five years.

Razak, who was prime minister from 2009 to 2018, was accused of channeling some US$700 million into his personal bank accounts from 1Malaysia Development Berhad (1MDB), a state-run development company. He lost power in the 2018 election.

Malaysia has been traditionally a victim of the ransacking of its treasury with the tacit support of bankers for decades. Malaysians are angry at the abuse of public funds linked to spiraling costs of living, which is further exacerbated by the newly introduced Goods and Services Tax (GST) in the country.

The nation is trying to cope with inflation after its economy was battered by the pandemic. The price of chicken, Malaysia's favorite meat, has become dearer due to the higher cost of feed and overseas demand. Currently, its price is above the government’s cap of 9.40 ringgit (US$2.07) per kilogram. The ceiling was at 8.90 ringgit in June.

Corruption has already become a poll issue with many candidates, including Pakatan Harapan leader, Anwar Ibrahim, declaring his assets publicly.

“We are hoping to establish a clean government, not one made up of thieves,” said Mahathir Mohamad, 97, at a poll rally on Nov 13 in Selangor's Sepang district.  The nonagenarian and the longest-serving prime minister of the country was accompanied by his 96-year-old wife, Siti Hasmah Ali.

Since 2020, Malaysia has been facing a political crisis after the Malaysian United Indigenous Party withdrew support, causing the fall of Mahathir's government. Two new governments have been formed since then, most recently in August 2021, headed by Yaakob.

For the first time, the state elections do not coincide with the federal election, so the focus is to secure as many parliamentary seats.

"We become accomplices of evil when we pretend to be blind, deaf, or dumb in the face of evil"

More than 21 million Malaysians will cast their votes to elect the 222 members of the Lower House (Dewan Rakyat). To form a government, a majority of 112 seats or more is required and nearly a thousand candidates from more than ten parties are vying for them.

Elections in Malaysia are largely fought on ethnoreligious loyalties. There are approximately 32 million people, 60 percent of them Muslims, 20 percent Buddhists, 10 percent Christians, and 6.3 percent Hindus. The cost of living, corruption, and instability call for a strong government in Malaysia.

“Vote based on your conscience. As a voter, be proud of your contribution,” Bishop Paul said in a letter distributed in the parishes of Melaka-Johor diocese.

Young voters make up a sizable portion of the six million people eligible to vote after the voting age was lowered from 21 to 18 and allowed automatic registration. Voters under 40 now make up half of the electorate.

The Church in Malaysia is all for a stable and strong government to meet the aspirations of the young population. In a letter, Archbishop Simon Poh of Kuching urged citizens to vote for candidates who are "capable and competent, transparent, trustworthy.”

Malaysia’s 21 million voters will have to select one of three coalitions, each headed by current or former top honchos of the United Malays National Organization party, which ruled the country under the Barisan Nasional coalition from independence in 1957 until the watershed polls of 2018, when the opposition Pakatan Harapan coalition, headed by Mahathir, defeated the disgraced Razak.

The reformist, multiracial Pakatan Harapan is now under the leadership of Anwar Ibrahim. It is looking for a second chance at governing after it fell apart with Mahathir in early 2020. Other alliances are led by former premier Muhyiddin Yassin and Mahathir.

The poll outcome will decide the course of Malaysia for the next five years. It will also have a bearing on 183,000 refugees who are living in Malaysia after the recent hardening of rhetoric towards refugees and asylum seekers.

Considered “illegal immigrants” under Malaysian law, they are bereft of the right to work or access to formal education.

The government of incumbent Prime Minister Yaakob has returned refugees to Myanmar, launched a new tracking system, and hinted at closing down the United Nations High Commissioner for Refugees (UNHCR).

“The presence of UNHCR offices is seen to be the biggest pulling factor towards the increased arrival of foreign migrants,” cabinet minister Abd Latiff Ahmad told parliament on Oct 7 shortly before the house was dissolved.

The government is trying to portray the UNHCR as a troublemaker and a scapegoat, which goes well with the conservative electorate who are more xenophobic and anti-refugees.

The UN agency came to Malaysia during the Vietnam refugee crisis in the 1970s. Its area of work expanded rapidly due to the conflicts and wars in Sri Lanka, Myanmar, Afghanistan, and Syria.

Since Malaysia is not a party to the UN Refugee Convention, it means that the UNHCR’s role is even more relevant for the country.

Refugees are hoping that whoever bags the majority and cobbles together a government will reconsider the plan to close the UN refugee agency office.