Be a worshipper of the Lord, not yourself, he urges 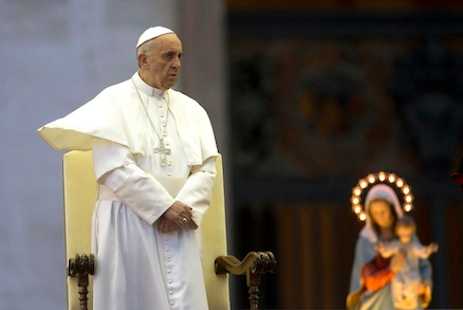 In his homily in the chapel of his residence, the Domus Sanctae Marthae, he said there were “three types of Christians in the Church: sinners, the corrupt and saints”.

Reflecting on the Parable of the Tenants in today’s readings, he said that the corrupt were represented by those in the parable who want to “take possession of the vineyard and have lost their relationship with the Lord of the vineyard”.

According to AsiaNews, he said: “These, slowly, slipped on that autonomy, autonomy in their relationship with God: ‘We do not need that Master, he better not bother us!’ And we will go ahead with this. These are the corrupt! Those who were sinners like all of us, but who have taken one more step forward, as if they had consolidated themselves in their sin: they do not need God! It seems this way, because this relationship with God is in their genetic code. And because they cannot deny it, they make a special god: they themselves are god. These are the corrupt.”

He continued: “The road of self-autonomy is a dangerous one: the corrupt are extremely forgetful, they have forgotten the love with which the Lord has made the vineyard, He made them! They cut off their relationship with this love! And they become worshippers of themselves. How bad are the corrupt in the Christian community! May the Lord deliver us from sliding down this road of corruption.”

He concluded: “Let us ask the Lord today for the grace to know that we are sinners, but really sinners, not generic sinners, but sinners in this, this and this, concrete, with the concreteness of sin. The grace not to become corrupt: sinful yes, corrupt, no! And the grace to travel the path of holiness. So be it.”