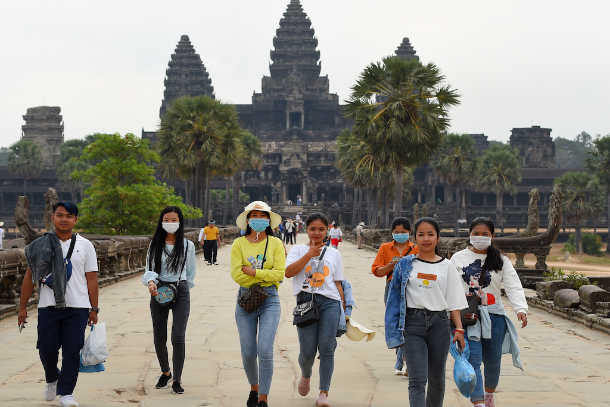 Tourists wear face masks amid concerns about the spread of the coronavirus as they visit the Angkor Wat temple complex in Siem Reap on March 6. Cambodia is facing economic damage on several fronts. (Photo: Tang Chhin Sothy/AFP)

When the Europeans decided to slice US$1 billion worth of trade preferences off Cambodian exports in response to a sharp deterioration in human rights and democratic values, Prime Minister Hun Sen was as defiant as he was cavalier.

Never shy on the international stage and always one to take advantage of the tools at hand, he immediately seized upon the outbreak of the coronavirus and — ignoring health precautions taken elsewhere — allowed a cruise ship to dock and kept his country open for business with China.

That bravado won him fans at home amid the reassuring message that the rights of passengers trapped on the Westerdam were more important than lost dollars to the European Union and that Cambodia was virus-free, with the implication that the world had lost its marbles over a bug.

Hun Sen, often described by government-friendly media as the “strongman” of Cambodia, looked good. But if a week is a long time in politics, then a month is a lifetime and the coronavirus is now a very different type of political football.

Cambodia is not corona-free and has fallen into line with health practices elsewhere: closing schools, self-quarantines imposed, runs on toilet paper and other commodities, air traffic arrivals halved and its ability to meet supply chains in a world of global trade severely diminished.

It’s a dreadful recipe in a country that remains poor and where the overwhelming majority must fend for themselves amid scarce government-provided resources.

The poor are getting poorer

If you believe international financial institutions, Cambodia’s poverty rate, defined as living on less than US$1.90 a day, has fallen dramatically to 14 percent over the last 10 years, while the Asian Development Bank (ADB) says the unemployment rate is just 1.1 percent, which is sheer nonsense.

The truth is hard to measure given most people in Cambodia live hand to mouth and Western-standard statistics combined with a social safety net simply don’t exist. The average salary is about US$280 a month, while monthly pay in the garment and textile industry is about US$180.

And the economy is already hurting. In the year following the 2018 election — when the main opposition party was banned and Cambodia was returned to a one-party state — almost US$1 billion was wiped off Cambodia’s GDP, bringing it down to about US$23.8 billion, as Western businesses fled.

Then hundreds of thousands of Chinese, who had pumped billions of dollars into the local economy, left amid high crime rates, intense anti-Chinese resentment and a justifiable ban on online gambling that left 8,000 people unemployed overnight.

That was quickly followed by the partial withdrawal of trade preferences under the EU’s Everything But Arms (EBA) policy in retaliation for the “rigged” 2018 election, which also marked an end to the country’s 25-year experiment with democracy.

The full impact of EBA losses is yet to be known as they will not take effect until Aug. 12. But the move will slice another US$1.1 billion a year off exports to Europe and hit the garment and textile industry hardest. The sector feeds about two million Cambodians — or one in eight — through 750,000 employees. Job losses are being estimated in the hundreds of thousands.

The coronavirus could knock another US$1 billion off Cambodia’s struggling GDP if you believe the ADB numbers that were compiled before 200 businesses closed their doors in the tourist town of Siem Reap last weekend.

It’s a tough ride for Cambodia’s poor as the government belatedly gets serious about the virus. A bottle of hand sanitizer can cost US$3, which for many is a full day’s pay.

Customs revenue is falling and the government says it’s because of Covid-19. Hun Sen has also scrapped Khmer New Year celebrations in Siem Reap, urged Khmers to use a traditional bow, or samphea, instead of a handshake and a krama, or customary scarf, instead of masks.

He has also told most ministries and institutions to cut expenses by half. That, the prime minister says, will save US$400 million, but again that’s less money for ordinary Khmers in the local economy.

He also wants one million Cambodians to visit local tourist sites to help offset a massive shortfall in foreign tourists after in-flight arrivals fell by half in February.

“To fight Covid-19 is our priority and that is the work we all must do,” Hun Sen said, according to the government-friendly news portal Fresh News.

In late February, Kristalina Georgieva, managing director of the International Monetary Fund, spoke too soon, forecasting China's economy would "return to normal in the second quarter" of 2020. That’s about as unlikely as Cambodia’s official unemployment rate.

And the unraveling of the global economy and its impact on Cambodia is a far cry from what was envisaged by the country’s ruling elite, who have tied their fiscal umbilical cords to China.

A grand plan centered on another rapid expansion of Chinese investment and migration was to be announced mid-year, which has raised deep concerns within the diplomatic community.

It includes 30 new special economic zones, each to be filled by 200 Chinese companies, and the mass migration of Chinese people to work and fill the endless rows of empty skyscrapers.

As one diplomat put it: “We’re talking millions of Chinese immigrants.” He added that this would substantially boost GDP and add critical mass to the local market but would also totally change Cambodia’s cultural landscape and risked severe social problems.

There has been no public consultation on the plan but it does hark back to 1994 when the government shelved Chinese plans to spend US$1 billion on a “new Hong Kong” — a city that was to be constructed adjacent to Phnom Penh and bring in 200,000 migrants from the People’s Republic.

The Phnom Penh Post reported that the plan was abandoned amid fears about the problems that massive foreign immigration could bring.

The latest plan is staggering and has been sold quietly among the elites as a panacea for the latest economic ills – the exodus of Western and Chinese investors and EBA losses.

But such grandiose ambitions will prove little more than a pipe dream until the world emerges into a post-corona era, which is unlikely anytime soon.

In the meantime, the potentially deadly and highly contagious coronavirus will become a convenient excuse for all that’s not right in Cambodia.