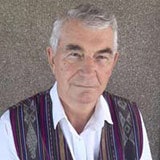 A girl working in a bar shows her fake passport that enabled her to travel abroad where she was required to "service" at least five male customers a day. (Photo by Vincent Go)

Strict justice and an unrelenting crackdown on child abusers are needed to protect children from sexual abuse.

In the Philippines, more Filipino child abusers are being convicted than ever before. Judges are delivering justice.

American nationals who have a history of child abuse become "persons of interest" and are placed under surveillance by Philippine and U.S. authorities.

Cases have been successfully investigated like that of U.S. citizen Arthur Benjamin who pleaded guilty to crimes of child abuse.

After more than four years in a harsh Philippine jail, he was deported to the U.S. and placed on trial in California. His interview about his sexual exploits with underage girls was captured on camera (see below).

The latest arrest was that of American Catholic priest Kenneth Hendricks. He was arrested on Dec. 5 in Naval, a town in Biliran province in the southeastern Philippines.

Father Hendricks, 78, has been accused of abusing children during his 40 years in the Philippines. He is innocent until proven guilty but is being extradited to the U.S. to stand trial.

U.S. Homeland Security agents arrested Hendricks after the U.S. District Court of Ohio issued a warrant for his arrest on Nov. 11. The priest faces federal charges for engaging in illicit sexual conduct in a foreign country, a crime in the U.S. Deport the abusers, not missionaries In 2018, Preda pursued justice for several child victims. They sought refuge and help at the Preda Home for Girls where they were helped to overcome trauma, were educated, protected, and empowered to file charges.

Many of the girls bravely and courageously testified after months of "emotional release therapy" in the home for abused children. They succeeded in testifying and fighting for their rights and won 16 convictions. Of their abusers, 15 were sentenced to life in prison. One got four years for acts of lasciviousness.

As early as 2006, Preda took out a court case against a German national who abused children in the Philippines. The judge invited the victims and witnesses to Germany where the case was to be heard. They testified and won the case and the child sex abuser was convicted and jailed.

More recently, five boys who are victims of British pedophile Douglas Slade testified by video link to a High Court judge sitting in London and told how they were sexually abused. Slade defended himself from a Bristol jail where he is serving a 24-year sentence after being convicted for historical sex abuse committed against English youths.

This month, the five Filipino boys abused by Slade won their civil case demanding compensation, and will hopefully receive payment. It's the first time in history that Filipinos have taken and won such a case in the U.K.

It is significant that the British judicial system pursued justice equally for children abused in the U.K. and in a foreign country. These arrests, trials, convictions, and victories will encourage other victims to come forward and tell their stories and be believed.

Slade falsely claimed to the court that he had been set up by Preda. But the court disagreed.

"In my judgment, Preda created a receptive environment in which vulnerable victims might work through their problems and therefore be able to explain more fully the nature of the abuse that they had undergone," said the court's decision.

Justice has been done and we hope there will be many more convictions to make the world a safer place for children.