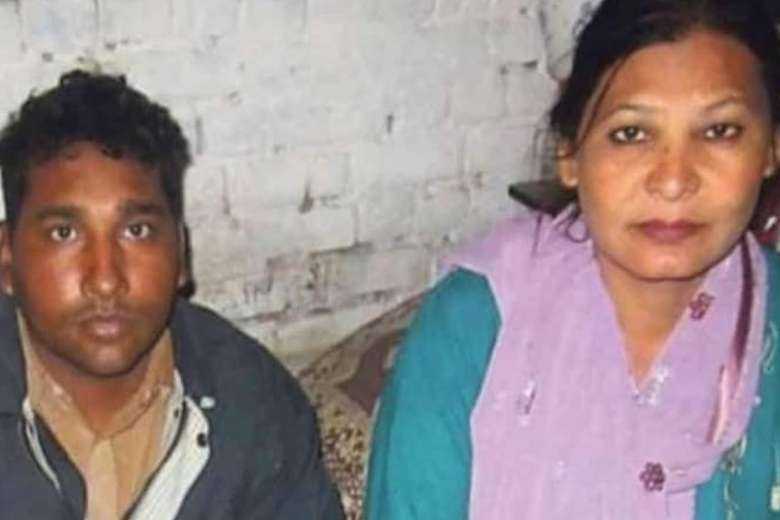 Shafqat Emmanuel and his wife Shagufta Kausar have been on death row in Pakistan since 2014 after being convicted of blasphemy. Their lawyer has described their case as 'bogus.' (Photo supplied)

“The whole flesh on his backside has withered due to bed sores. His entire body is marred with wounds. The poor fellow is not taken to hospital,” said the Muslim lawyer.

“His children couldn’t continue their education. His wife is in depression. She started crying frantically during our meeting last year. ‘I will die here,’ she said. Asia Bibi stayed in the same cell.”

Catholic woman Bibi was acquitted of blasphemy in 2018 after spending eight years on death row in Pakistan.

Malook, who successfully defended Bibi and had her blasphemy conviction overturned in the Supreme Court, is contesting the charges against Shafqat Emmanuel and his wife Shagufta Kausar in Lahore High Court.

The Christian couple were arrested in 2013 and sentenced to hang in Toba Tek Singh town of Punjab province in addition to a fine of 200,000 rupees (US$1,310) after being convicted of sending text messages insulting the Prophet Muhammad.

It means that being Christian and a blasphemy accused is itself sufficient for being hated by police, judges, lawyers and the overall society

Sentencing went ahead despite it transpiring that a SIM card presented as evidence by police was bogus. The case was filed by Mohammed Hussain, a prayer leader at a mosque in Gojra Punjab province who alleged that the couple had sent religiously offensive text messages to him and other Muslims.

The couple pleaded their innocence, maintaining they were illiterate and could not write the text messages that were written in English. They also said the SIM card was bought using Kausar’s stolen identity card.

They have been jailed separately since 2014, with Shafqat in Faisalabad and Shagufta in the Women Prison Multan, the only jail for females in Punjab province.

According to a 2014 medical assessment, Shafqat was diagnosed as a paraplegic and suffered from large pressure sores. Some of his injuries originate from a gunshot wound (unrelated to the events that led to his imprisonment and death sentence). Shafqat’s family stated that he was in a coma for three days in March 2021 but was not taken to a proper medical facility.

“It’s a bogus case. All judges are afraid. Nobody wants to hear their case and keep tossing it to another bench,” said lawyer Malook, who raised his concerns about Shafqat’s health in an email sent last month to Mirza Shahid Saleem Baig, inspector general of prisons in Punjab. He received no reply.

“A session judge who visited the Faisalabad jail described Shafqat as a hopeless case. It means that being Christian and a blasphemy accused is itself sufficient for being hated by police, judges, lawyers and the overall society. They are left to die,” Malook added.

The couple’s plight caught international attention when the European Parliament last month approved a resolution to review Pakistan's preferential trade status and rescind its eligibility for GSP Plus due to the country's history of abuse of blasphemy laws, especially relating to this case.

“The health of Shafqat Emmanuel is rapidly deteriorating. He is completely paralyzed from the waist down and must rely on prison guards to perform the most basic tasks like leaving his bed and using the bathroom. His pain is worsening every day,” it stated.

The UK-based NGO also sent a letter to Punjab’s prison authority on April 12 and demanded the immediate release of the Christian couple.

“The couple should not be in jail at all, let alone at risk of execution. Pakistan’s blasphemy laws do not meet human rights law and standards, they lack essential safeguards to minimize the risk of rights violations and illustrate the dangers faced by the country’s religious minorities. The urgency with which the injustices in this case must be remedied is heightened by Shafqat’s pain and lack of access to appropriate health care,” the letter stated.

“I find it highly distressing that a prisoner who needs urgent health care is not being shifted to the jail hospital. He should not be detained in the first place, and if he is not going to be released, prison authorities must ensure provision of adequate health care, whether it is available inside or outside the prison.”

“The resolution was based on ignorance of facts and false propaganda as not a single case of misuse of blasphemy laws was reported in the country during the last six months. All minorities living in Pakistan are satisfied with the laws of Pakistan,” he stated in May 1 press conference of clerics.

“Some individuals and institutions wanted to damage Pakistan's dignity, honor and relations with other nations by spreading false and baseless propaganda. The international community should respect the sanctity of all religions.”

According to the Human Rights Commission of Pakistan, police data shows that at least 586 persons were booked on charges of blasphemy in 2020, with the overwhelming majority from Punjab.

Church leaders and human rights groups say blasphemy allegations have often been used to intimidate religious minorities and settle personal scores. All prisoners accused of blasphemy live in fear of death and are kept in solitary confinement.