Two Myanmar migrants who are serving life sentences for the murder of two British tourists six years ago were not included in the latest amnesty for prisoners in Thailand.

King Maha Vajiralongkorn of Thailand granted amnesties to prisoners nationwide to mark Father’s Day and the birthday of his father King Bhumibol Adulyadej on Dec. 5.

In August 2019, the two convicted workers had their sentences commuted to life imprisonment thanks to a royal pardon on the Thai king’s 68th birthday.

Sein Htay from the Migrant Workers Rights Network who helps the two convicts said it is sure that the suspects in the rape, murder and drug cases will not be included in this amnesty in addition to Myanmar men.

“We have to wait and see whether their punishment will be reduced. It is sure that they will never receive the death penalty. They may be released next time,” Sein Htay told local the Myanmar Times.

On Aug. 29, 2019, Thailand’s Supreme Court upheld the finding of lower courts that Zaw Lin and Win Zaw Tun killed David Miller, 24, and Hannah Witheridge, 23, on the island of Koh Tao in September 2014. The pair also had convictions upheld for raping Witheridge.

They were sentenced to death by a Koh Samui court on Dec. 24, 2015. They have denied any involvement in the murder and their lawyers have appealed the decision twice within the Thai legal system.

The men said they had been tortured into confessing and police provided only circumstantial evidence of their guilt, including unreliable DNA evidence.

Rights groups have said the migrants were used as scapegoats by the authorities, who were under pressure to solve a crime that made international headlines.

Last September, campaigners launched a petition at the Asean Peoples’ Forum at Thammasat University in Bangkok to seek royal clemency. 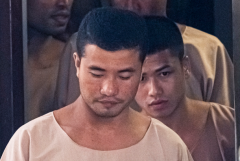 Myanmar’s union minister of labor and immigration told the media last year that he would continue cooperating with Thai authorities to secure a pardon.

In June 2018, Thailand carried out its first execution since 2009, prompting criticism by rights groups who had hoped the country was moving toward abolishing the practice.

Myanmar migrants make up the largest number of migrant workers in Thailand, with estimates putting the figure at 2.3 million out of a total of about 3.6 million, according to the 2017 UN Migration Report.