Convent in Japan invites outsiders to try a prayerful life

Visitor says it had a crucial impact on her faith 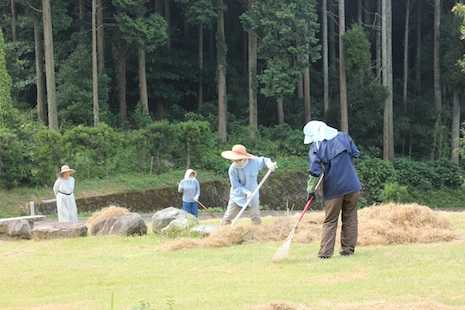 When Akiko and Fumiko, aged 28 and 23 respectively, arrived at the Trappistine convent of Our Lady of Imari, they were not initiates to the order, but they weren’t casual visitors either.

They had set aside the following three months for a program in which they would labor and live with the sisters as temporary members of the community.

The convent started this program as a way to give young people a chance to make prayer the center of their lives, not only during their stay but in their lives afterward.

Prayer is like the pulse of this convent, which sits on a mountain overlooking Imari Bay in Saga Prefecture, some 940km west of Tokyo. The first prayers begin promptly at 3:50 am, and the day ends with a Marian hymn at 7:40 in the evening.

The traditional form of Christian devotion at Our Lady of Imari focuses on the Mass and the daily “office”, or schedule of seven prayer sessions. Akiko and Fumiko joined in this experience and devoted more than four hours to prayer each day, in addition to three and a half hours set aside for study and about three hours for manual labor.

Fumiko, who lives in Fukuoka Prefecture, heard about this program by word of mouth. “I was in a tough spot psychologically, so I wanted to get to know God and find my path in life,” she says of her motivation to participate.

Akiko, from Aichi Prefecture, had embarked on a career but maintained an interest in the consecrated life. She learned of this opportunity during a chance visit to a different church than usual. She quit her job, persuaded her non-Christian family members to give her decision their blessing, and filled out the application.

When they first joined the program, the two women primarily worked in the garden “with a sickle in the hand, morning and afternoon,” says Fumiko. “It was really hard at first,” she added with a pained laugh.

With the sisters’ instruction, Fumiko and Akiko not only helped grow rice and vegetables for the community’s table but also assisted with producing and packaging jelly to be sold.

It was about a month into their participation in the program before they were admitted into the private cloistral living area of the nuns and, thus, into the innermost communal life of the convent.

The two had bedrooms on the second floor. “Really, there’s the bed, and there’s the dresser, and that’s it,” says Akiko.

In this new life, they exchanged cell phones for simple poverty. They prayed from early morning until night. It is a life they could scarcely have imagined before, but it helped them turn toward God.

As with all Benedictine orders, the Rule of St Benedict governs life here. “I don’t really know much about the specifics of the Rule,” says Fumiko, “but I can see it is aimed at helping people love both God and man.”

For Our Lady of Imari, the program was something of a trial run. Sr Setsuko Shibuya, prioress at the convent, says, “The life of this community is something that you can’t really grasp just by thinking about it. We take joy in coming together to praise God; that’s really what it is.

“We think of it as ‘getting close to God,’ but that’s something that you can’t do if you don’t make space for it.”

That is why they made the “wholehearted” decision to open a portion of these “religious practices dating back to the sixth century” to women who aren’t consecrated.

For Fumiko, occupying the space provided by the progam had a crucial impact on her faith.

“When I was working, I wouldn’t even go to Mass on Sundays. But now, I really understand the meaning of the words, ‘Happy are those who are called to his supper.’”