Control of book publishing 'a political obsession in China' 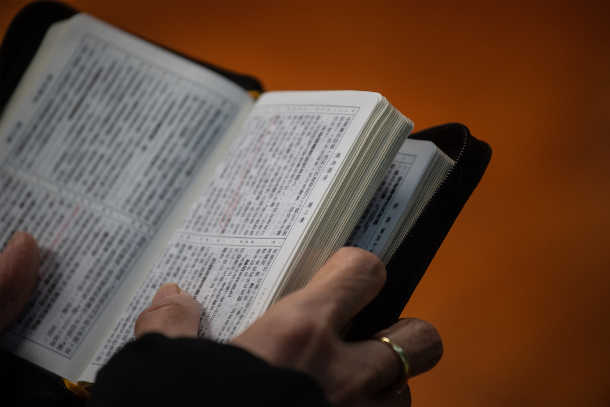 A worshipper holds a copy of the Bible while attending a church service ahead of Christmas in Hong Kong on Dec. 23, 2018, during which several members of the congregation wore black in support of underground churches in mainland China. Any unauthorized importation of religious books from outside mainland China, particularly from Hong Kong and Taiwan, is illegal. (Photo by Philip Fong/AFP)

China has introduced tough new restrictions on the publication and distribution of religious and other books.

Updated regulations list 65 kinds of content which are strictly prohibited or need prior approval, including eight related to ethnic and religious affairs.

From March, authorities have required a content review of all books published since last year in the fields of literature, works for children and textbooks, including on so-called popular science.

A Catholic named Peter told ucanews.com that an aim was to cover up the sinful history of the Chinese Communist Party (CCP) in order to maintain the legitimacy of its rule and continue "brainwashing" the population.

A further aim was to reduce or remove any advocating of what communist officials regard as "Western values" from textbooks and other publications.

He added that, in the past, authorities had not always enforced publishing restrictions, but now that they faced an "ideological crisis" they were both introducing stricter requirements and stepping up enforcement.

A Christian named Paul said that even before the new publishing regime came into force, producers of religious material were struggling to survive financially.

The cost of a CCP required Standard Book Number (SBN) had already skyrocketed and even titles are being strictly scrutinized, he added.

Only government controlled operations will be able to publish, market and distribute religious material.

Others will only be able to produce officially approved internal publications that cannot be sold to the public. This constitutes a heavy blow to religious publishing.

A Christian, who uses the pseudonym Zhang Yan, said even internal distribution of any material that had not been officially sanctioned could result in publishers being shut down.

She complained that many books that were finally approved had been subjected to "endless changes".

Any unauthorized importation of religious books from outside mainland China, particularly from Hong Kong and Taiwan, is deemed illegal.

Some such works are still smuggled in, but since the beginning of this year customs and other officials have been cracking down in this regard, including searching individuals and confiscating books found to be on a banned list.

Shi Delan, a Catholic in Shaanxi province, said that two or three years ago she could still buy religious books from bookstores or online, but it had since become increasingly difficult to obtain many titles.

Maria, a Christian who immigrated to Australia but later returned to live in Shanghai, felt some books of faith published on the mainland "fundamentally deviated" from the original.

She is sometime able to get friends to bring her back English language religious books from overseas.

One academic said he these days finds it harder to obtain the latest overseas research on Christianity amid official attempts to focus on the so-called 'Sinicization of Christianity'.

He warned that official control of book publishing and minimizing outside cultural influences has become a political obsession in China.