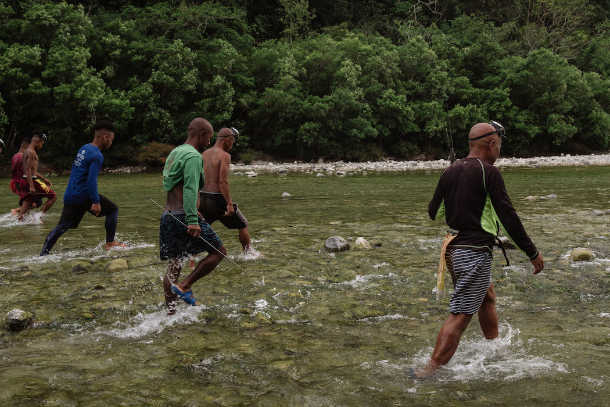 Tribesmen search for food in a river which tribal people claim is being threatened by the building of a dam in the northern Philippine province of Quezon. (Photo by Pau Villanueva)

Tribal people were all ears as a Catholic priest talked about the love of God and the challenge to defend his creation during last month’s Holy Week observance in the Philippines.

The celebration was held in the hinterlands of Quezon province, home to the Dumagat tribe whose community has been threatened by the proposed building of a huge dam.

"God loves us, and we hope that all of our needs will be provided according to his plan," preached Franciscan priest Pete Montallana, who heads the Save Sierra Madre Network Alliance.

The priest, who has been living with the tribal people for 30 years, said caring for the environment is an ongoing challenge for everyone. He said the building of a dam is not only a threat to the tribe but also to God's creation.

The tribal leaders agreed with the priest. They fear a dam will result in the plunder of their land, their river and their forests. The government has been insisting that the construction of the US$226.4-million New Centennial Water Source-Kaliwa Dam Project, which has been in the pipeline for three decades, will address a lot of problems, including a water crisis being experienced by the 12 million residents of Philippine capital Manila.

Up to 85 percent of the project will be funded by China through official development assistance. The remainder is to be shouldered by the Philippine government through the Metropolitan Waterworks and Sewerage System.

The China Energy Engineering Corporation will construct the dam in the towns of General Nakar and Infanta in Quezon province. It is expected to supply some 600 million liters of water per day to Manila.

The contract with China was inked during Chinese President Xi Jinping’s visit to Manila in 2018. Should construction go ahead this year, the dam is expected to be ready by 2023.

The tribal people, however, said they were not informed about the project. "It was not fully discussed with us, but we know that it will be harmful to the community," said Krisanto, the tribal head of Yokyok, a village that sits on the bank of the Agos River, which will be harnessed by the dam project.

The Dumagat people, who live in the mountains of Aurora, Rizal and Quezon provinces in the northern region of Luzon, depend on their forests and rivers to survive. They rely on the river to transport their produce, mostly bananas, honey and tree resin, to market.

When in season, they can catch fish, eels and shrimps in their rivers that they barter for rice in the lowlands. They regard their rivers as sacred and having healing powers.

"If nature gets destroyed, we won't be able to eat, to live and to breathe," said Rodrigo, another local tribal leader. "We will only survive as long as we have our lands."

Aileen, who belongs to the Dumagat-Remontado tribe in the village of Cablao, said the dam will not only destroy their ancestral lands. "We also stand to lose our identity, our livelihood, and our homes," she said.

People have been advised to keep their distance from the river when the dam project starts. Although they were promised resettlement in other areas, they fear these areas might not be suitable for their needs.

"We already know how to live here. We know that our land will last us a lifetime," said Lucila, another Cablao resident.

Authorities have also promised jobs, but Aileen said: "Why should we be hired if we don't even know how to build a dam? Would they even consider hiring uneducated people like us?" Tribal leaders vowed to continue opposing the project, but they are also afraid that their people will succumb to government pressure.

Poleng, one of the elders, said many villagers do not understand the threat the dam poses. "Letters inviting us to dialogues are written in English," he said. "We cannot read them."

"We oppose the project for our young people," said Amy, another tribal elder. "It will be the end of our clan if we do not take steps to oppose it."

"As long as there is a reason to fight, and as long as there are people and institutions that support us, we will continue to fight for our river," added another elder.

The pastoral letter acknowledged that while the dam project could mean an adequate water supply for people in Manila, it was a cause for concern for the tribal people.

The issues raised by church leaders include the inundation of tribal communities and possible disasters that could be caused by an earthquake because the proposed dam will sit on a fault line.

The bishops quoted Pope Francis, who warned: "Caring for the ecosystems demands farsightedness, since no one looking for quick and easy profit is truly interested in their preservation."