Constitutional crisis on the cards in Timor-Leste 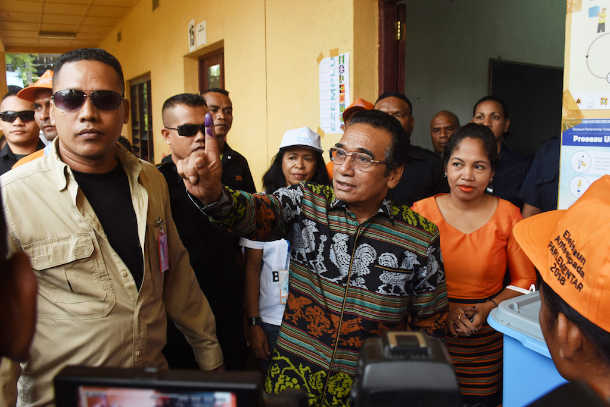 Timor-Leste President Francisco Guterres shows his marked finger after casting his ballot during the general election in Dili on May 12. (Photo by Valentino Dariell De Sousa/AFP)

The nascent government of Timor-Leste Prime Minister Taur Matan Ruak has effectively declared open war on President Francisco "Lu’Olo" Guterres by denying him permission to travel to Portugal, a parliamentary right under the ironically Portuguese-based system in the Catholic-majority nation.

The conflict is over 11 people originally nominated for ministerial and vice-ministerial posts. Many posts are key to running the impoverished nation, but many nominees are under investigation for corruption, meaning the country does not have a full cabinet two almost two months after a general election.

The government is under pressure to resolve the situation; it only has 13 days to present its program to parliament or it will breach the constitution. It must have a full cabinet in order to present its program as under the Timor-Leste system ministers and vice-ministers, including the prime minister, do not sit in the parliament (a similar system to the United States), making a clean break between the executive and the legislature.

The government claims that the president’s blocking of ministerial nominees is unconstitutional.

The new PM, who was described as a "puppet" in a leaked New Zealand diplomatic cable recently, has withdrawn two names and horse trading is likely to continue this week.

The second most important minister, Xanana Gusmao, who has been nominated as minister adviser to the PM and will also be responsible for negotiations on extracting and processing gas reserves worth US$50 billion under a new treaty with Australia, remains outside the cabinet as a protest against President Guterres’ rejection of so many nominations for key positions. Joining Gusmao in his protest was senior colleague Alfredo Pires, nominee for minister for natural resources and minerals.

The governing Alliance for Progress and Change has withdrawn the names of Gustao de Sousa, nominee for strategic investment and planning minister, and Marcos de Cruz, nominee for deputy agriculture minister, who is also embroiled in a court case. His name has been replaced by Rogerio de Araujo, with a rejigged title of minister for fisheries, who has also joined the Gusmao/Pires protest of refusing to be sworn in.

The government has accused the president, a senior figure in the opposition Fretilin party, of withholding the names of nine people who are only suspected of corruption and have no pending legal actions against them. Guterres has referred them to various courts and corruption bodies for investigation.

"We really hope the president can solve his impartially because in 2017 [after the July election] he allowed members of the government who had cases in court to become ministers. So why is the president rejecting members who are not standing?" said Duarte Nunes, parliamentary leader of the Congress for the Reconstruction of Timor, the chief party in the new three-party government alliance led by Gusmao.

Filomeno Paixao, who was last week decommissioned from his post as a brigadier general in the army, is due to be sworn in as defense minister on July 10.

President Guterres has effectively laid down a challenge for the government.

"The members of the government must be serious people and not be involved with allegations of breaking laws," he said, adding that he was confident that the "prime minister is doing all he can to include in this government those persons who are reliable, effective and efficient to guarantee a successful and transparent government in the coming five years."