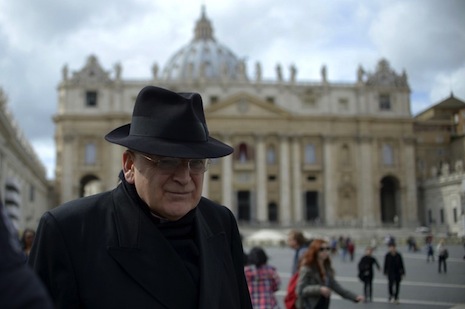 Pope Francis’ plan to reform the Roman Curia is primarily a two-pronged approach: changing the bureaucratic structures and changing the members of Vatican agencies.

Today we saw yet another sign that the new pope wants people in synch with his more pastoral vision of the church, and in particular with his views on what makes a good bishop.

U.S. Cardinal Raymond Burke has been dropped from the Congregation for Bishops, an office that wields tremendous influence in shaping the world’s hierarchy. Burke has been a kind of folk hero to conservative Catholics, in particular for his statements criticizing Catholic politicians who support legal abortion. Moreover, he has said that bishops who refuse to withhold Communion from such politicians are weakening the faith.

It was significant that the new American named today to the Congregation for Bishops, Cardinal Donald Wuerl of Washington, has publicly defended his decision not to deny Communion in such situations.

The change means that Cardinal Burke will no longer be among the approximately 30 members of the congregation who oversee the vetting process for bishops’ nominations.

Just last week, Cardinal Burke appeared to take issue with Pope Francis’ low-key approach on some topics. The pope said earlier this year that the church cannot keep hammering only a few issues, including abortion and gay marriage. Asked about this by the Catholic network EWTN, Burke expressed some perplexity at the pope’s comments and said the church “can never talk enough” about abortion and marriage; he said abortion today is “literally a massacre of the unborn.”

It will be interesting to see if Cardinal Burke hangs onto his job as head of the Apostolic Signature, the Vatican’s highest tribunal. The cardinal frequently gives interviews, and his Vatican position has given his statements much more resonance in the media.

Pope Francis retired others out of the Congregation for Bishops, too, mainly for reasons of age. Dropping Cardinal Burke from the congregation was more unusual because he is a relatively young 65.