A Congolese bishop has urged international action to stem massacres in his diocese and accused the country's government and media of indifference to current sufferings.

"Only last year, at least a thousand people were killed here -- this has been going on for a decade, and the situation has deteriorated into a chain of massacres," said Bishop Melchisedech Sikuli Paluku of Butembo-Beni in Congo's North Kivu province.

"I appeal to the international community to hear my country's cry of suffering and help its poor people. Given the Calvary we've been forced to undergo for so long, we feel ourselves abandoned."

The bishop made the appeal in a video distributed Jan. 14 by the German branch of Aid to the Church in Need as a delegation of Congolese and foreign bishops began a six-day visit to the region.

In a commentary, Aid to the Church in Need said resource-rich North Kivu had been plagued by Allied Democratic Forces, a rebel movement from neighboring Uganda headed by a Christian convert to Islam who had declared affiliation to Islamic State.

It added that Congolese forces and troops from an 18,000-strong U.N. stabilization mission had persistently failed to pacify the "epicenter of violence" around Beni, fueling Africa's longest humanitarian crisis.

"Our country's media hardly speak about this, if at all, while all that interests our men of politics is how to share the cake of power," Bishop Sikuli Paluku said in his video message, which included scenes of recent violence.

"Despite everything, we must hope things get better and that the state makes greater efforts in future to stop these massacres."

The delegation from the Congolese bishops' conference and the Association of Episcopal Conferences of Central Africa began its tour of Butembo-Beni, Bunia and Goma dioceses Jan. 15 and will hold prayers and Masses for peace and justice, according to local media.

However, in the latest atrocities, 15 women and children were reported killed with machetes by Allied Democratic Forces fighters in a camp Jan. 13, while at least 40 others died in the militants' attacks near Beni Dec. 31. 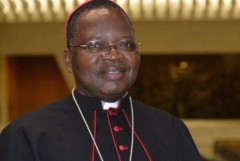 In a Jan. 3 cathedral homily, Bishop Sikuli Paluku announced a "solidarity campaign" to help people displaced by the violence, which will include collections for Caritas.

"This means we now have more internally displaced than one month ago. It is important that, in addition to prayers, we also make things happen. These are our brothers and sisters, and sharing is a requirement for every Christian."

The Catholic Church has long been involved in peace efforts in Congo, where around 5 million people have been displaced by fighting in the east, with more than 900,000 seeking refuge in neighboring countries and half a million more internally, according to 2020 data from UNHCR, the U.N. Refugee Agency.