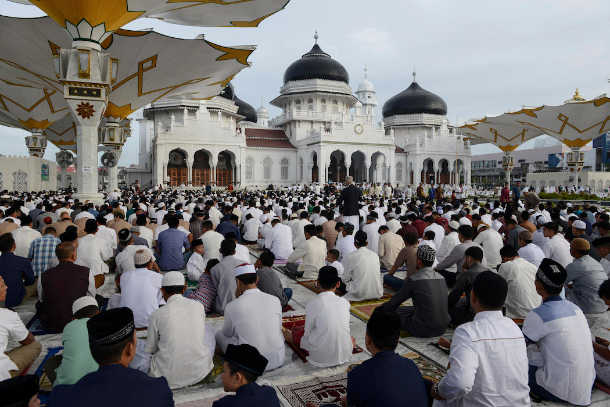 Indonesian Muslims take part in a morning prayer at Baiturrahman mosque in Banda Aceh in this June 15 file photo. Preoccupation with religious conformity is costing Indonesia when it comes to benefits gleaned from innovation. (Photo by Chaideer Mahyuddin/AFP)

A succession of demands for religious conformity made by civic leaders in Indonesia has accelerated a trend toward constraints on society and an insistence on religious observance.

Local officials appear to be racing to keep up with what is becoming a fashion for forcing their constituents into religious straightjackets just as the president is appealing for better education, greater creativity and a more innovative society in order to compete more effective economically.

While some would argue that the aims of religious observance and creativity are not mutually exclusive, the range of recent demands being made of both teachers and students suggest that creativity is likely to take second place.

In Pasuruan regency in East Java, Muslim residents have been told they should spend two hours per day giving children time for religious education. Televisions and gadgets should be put away to allow a concentration on religion. Regent Irsyad Yusuf declared that the move was part of his efforts to improve religious education in the region, adding that he expected religious education to help lower youth crime rates and drug abuse.

In Palembang, capital of South Sumatra province, Mayor Harnojoyo on Sept. 19 signed Mayoral Decree No. 69, which stipulates that civil servants should join a "Mass Dawn Prayer Movement." Palembang city official Reza Pahlevi said under the decree, officials must 'check in' through a mobile phone application when they perform prayers at houses of worship near the home or office.

Banten Governor Wahidin Halim issued a directive ordering Muslim civil servants in the province to pray five times a day at mosques. The provincial administration's spokesman, Amal Herawan, said the directive was issued to encourage government employees to remain faithful to their religion.

While no punishment or sanctions would be imposed on those who ignored the directive, civil servants would be expected to halt all activities upon hearing the call to prayer.

In 2014, the Gorontalo government ordered all civil servants in the province to attend mass prayer sessions and religious sermons in a bid to stop adultery.

At the same time, a crackdown on behavior that doesn't conform to the norm is underway. The LGBT community is a particular target, with one recent study referring to the climate of fear that has been created within that community as a "moral panic."

Gatherings that question what happened in Indonesia after the purported coup of 1965, when at least 500,000 communist party members and supporters were massacred across the country, have long been the subject of efforts to sterilize communal memories. Anything smacking of left-wing theory is suspect and the writings of Marx and Lenin remain banned in the country.

The type of Islam that people are supposed to support is also increasingly constrained. Some attempts to direct people away from contentious ideas aim to reduce the perceived increase in radical thought. Vice President Jusuf Kalla says universities should regulate sermons by setting guidelines for clerics at campus mosques as part of efforts to fight radicalism.

Ahmadiyah, a sect of Islam that insists that Pakistani teacher Ahmad was a prophet, in defiance of mainstream Muslim insistence that Muhammad was the last prophet, has been the target of attacks over the past decade. In 2011, a mob beat three adherents to death at Cikeusik in Banten province.

A recent proposal to hold a seminar on the establishment of a global caliphate in Bogor south of Jakarta was turned down by police, who said the expected 3,000 attendees could potentially threaten security and public order. "Police investigation showed that the discussion would be focused on how a caliphate can replace the democratic system in Indonesia," Bogor Police chief Adj. Sr. Comm. Andi Moch Dicky told reporters.

Not everyone is prepared to toe the line on the orders for civic sanctity. Mas'ud, an expert in state administration from Malang University in East Java said the Palembang initiative errs in trying to regulate a person's relationship with God. Ismail Hasani, a researcher at the Setara institute, which studies discrimination, agreed. The dawn prayer is "private territory," he stated.

The increasing regulation of society threatens to stifle individuality just as the nation says it needs creativity and innovation to compete in the modern economy.

Populist organizations espousing exclusivist and intolerant views, which openly demand the democratic state be replaced with a theocratic one, certainly represent a threat to Indonesia's religious pluralism and tradition of secular government.

However, the strategy of criminalization against them embraced by President Joko Widodo following the Islamist campaign against former Jakarta governor Basuki Tjahaja Purnama, which shook the capital in 2016 and 2017, can be likened to fighting illiberalism with illiberalism.

In July 2017, Widodo issued a decree amending a law on mass organizations to enable the banning of groups that do not accept the national ideology of Pancasila, promote communism or advocate separatism. The decree was immediately used to disband Hizbut Tahrir Indonesia.

Yet many intellectuals believe that stifling debate is reverting to the mind control of the Suharto regime. Widodo has deplored the country's lack of innovation and creativity, saying it holds back economic development.

The country scored only a moderate improvement in the World Economic Forum's global competitive ranking this year, with a poor record on innovation one of the reasons blamed. Research and development expenditure is a very low 0.0849 percent of GDP.

With the business community now talking about Industry 4.0, a new phase of the industrial revolution based on digital expertise, Indonesia is in a very poor position to play a role in anything but the simplest manufacturing.

Major tech firms, pushed to contribute to the economy of such an important market, have been forced to set up their own programs to boost proficiency. Despite all of the regulations issued by local leaders telling people to fulfill their religious obligations, there's little sign that doing so will pay off in an increasingly competitive world.