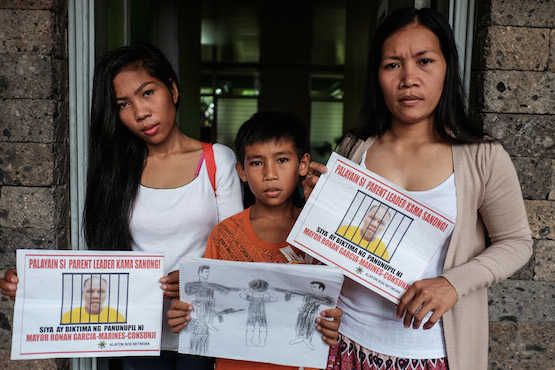 From left to right Bati Sanong, 20, Mark Shane Sanong, 11, and Babelyn Sanong, 33, appeal for the release of evangelical pastor Kama Sanong who was arrested for illegal possession of firearms and explosives. Babelyn claimed that charges against her husband were fabricated. (Photo by Mark Saludes)

Like many boys his age, Mark Shane Sanong can draw trucks, helicopters and guns. Unlike most boys, 11-year-old Mark shows weapons trained on his father.

Sprawled on the floor of a shelter in Manila for displaced indigenous people, Mark keeps silent as his mother, Babelyn recalls how four trucks with troops arrived before dawn on July 11 at their mountain hamlet in Sultan Kudarat, a province on the southern Philippine island of Mindanao.

His drawing shows what roused him from sleep: soldiers storming into the house of Pastor Kama Sanong of the Dulangan Manobo Evangelical Church, training their guns on the pastor, his father and ordering him to the floor.

Mark was "shaking and shocked" and mute as the guns turned their way, his mother recalls. He could not even cry when soldiers arrested his father after a three-hour search that allegedly unearthed a pistol, an air gun and a rifle grenade.

Only the air gun, a standard weapon in a community of farmers and hunters, belongs to the family, says Babelyn.

Mark's father, who also belongs to a tribal organization battling loggers and plantation developers, is in jail. Mother and son now stay at the shelter with 200 other displaced indigenous folk.

They are among more than 850,000 Mindanao residents displaced by conflict in the first half of 2017, according to the U.N. Office for the Coordination of Humanitarian Affairs.

Experts at the Children Rehabilitation Center, which gives Mark psychosocial aid, say the boy has yet to recover from trauma.

"He doesn't want to talk to anyone, not even to his mother," says Eilek Manano, executive director of the center.

Mark exhibits great fear and anger, and  "the mere presence of a man in uniform terrifies him," she adds.

Like other children from Mindanao's minority groups, Mark finds himself a government target as tribes fight to keep lush ancestral lands safe from big business.

Last year, UNICEF reported that children accounted for two-thirds of more than 3 million people affected by fighting between government troops and half a dozen rebel groups. The Philippines ranks third — after Colombia and Brazil — as one of the world's most dangerous countries for environmental activists.

Many of Mindanao's tribes voted for President Rodrigo Duterte, who once campaigned to stop the killings of Lumad.

But in his first year in office, the army killed half a dozen Lumad civilians in Mindanao.

The Save Our Schools Network (SOS) reports that more than 90 schools have also come under attack. The military accuses the non-government groups running these facilities of churning out dissenters.

Two days before his threat, Lumad youth leader Michelle Campos was at a meeting where Duterte told activists that even if 10,000 Lumad die in "a civil war", he would do nothing about it.

The 18-year-old broke down, remembering how paramilitary forces killed her father and an uncle in front of 100 children, including her brother and sister, in September 2015.

Campos said the killings followed demands by soldiers to allow mining in their valley, which appears in international surveys as a rich source of coal.

Mark's symptoms are similar to what affected children in Campos' village.

Teachers and caregivers struggle with tantrums and the sudden tendency to cling.

"In some cases, they refuse to eat, they cannot sleep, and they become loners," says University of the Philippines professor of psychology Andrea Martinez.

"We must let him tell the story behind the images in the form of conversation," she adds.

On the day of the interview, however, the Lumad were told the government wants them out of the temporary shelter in the national capital and back home, where more deadly conflict awaits.