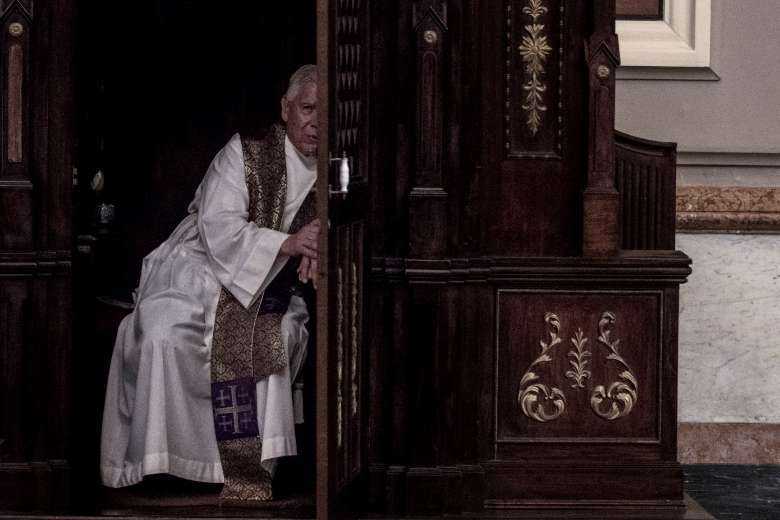 A priest hears a confession at the Metropolitan Cathedral in San Jose, Costa Rica. (Photo: AFP)

To protect the sacrament of reconciliation as a "channel of grace" for victims of sexual abuse, the Catholic Church must do a better job of instructing priests on what to do if a victim recounts his or her abuse in the confessional and in the unlikely case that an abuser confesses, said Jesuit Father Hans Zollner.

"If the church did more to help confessors be empathetic listeners as well as skilled interpreters of the church's moral teaching, it would make it clearer that the sacrament of reconciliation can be an instrument in the fight against abuse," Father Zollner wrote Nov. 11 in The Tablet, the London-based Catholic journal.

"If the church is not able to better explain why it does not protect abusers or other serious criminals from justice -- and why the seal can help safeguard children and vulnerable adults -- state legislators may come to target the inviolability of the seal of confession," he wrote.

The Jesuit has been a member of the Pontifical Commission for the Protection of Minors since its creation and is president of the Institute of Anthropology: Interdisciplinary Studies on Human Dignity and Care at Rome's Pontifical Gregorian University.

Father Zollner's article was occasioned by debate in France after the release in October of a report by an independent commission estimated more than 330,000 children had been abused by church personnel since the 1950s.

The report "provoked the question that had been raised after the publication of similar reports in Australia, Ireland, the United States and elsewhere: Should it be mandatory for a priest who hears about sexual abuse committed against a minor in confession to report it to the secular authorities?"

With the exception of prison chaplains, priests are highly unlikely to ever hear a confession from a perpetrator of sexual abuse of children

However, he wrote, there is no "compelling evidence showing that abuse would be prevented by removing the seal" of the confessional.

The Code of Canon Law absolutely forbids a priest from revealing anything he has learned in the confessional for any reason. As Father Zollner wrote, "A priest cannot break the seal to save his own life, to protect his good name, to save the life of another or to aid the course of justice. Priests who violate the seal of confession are automatically excommunicated."

While the church's poor record of preventing abuse and handling allegations has created suspicion about its vigorous protection of the secrecy of the confessional, the Jesuit said that secrecy makes "people feel free to say things in confession they wouldn't say anywhere else."

Historically and still today, he said, that "safe space" is used much more often by survivors and victims than by abusers.

"With the exception of prison chaplains, priests are highly unlikely to ever hear a confession from a perpetrator of sexual abuse of children. Just one priest has told me that he had heard the confession of a perpetrator -- and that was on just one occasion," he wrote.

But, he said, "a victim of clerical sexual abuse as an adult made the sometimes-neglected point to me that many victims feel guilty and find it extremely difficult to speak for the first time about the unspeakable. She worries that if you cannot be absolutely sure that what you say in confession will remain confidential, one of the few safe places where starting to talk about an experience of abuse is possible may be lost."

To assist victims, protect the sacramental seal and promote justice, Father Zollner said, the Catholic Church should issue a new instruction for priests who hear confessions, spelling out things they need to know specifically regarding cases of abuse or suspected abuse.

First, he said, it would "reiterate obligations to respect the laws for reporting abuse outside of the confessional and it would also reaffirm the seal. It would emphasize the personal responsibility of the confessor," including "the requirement to call on a perpetrator to stop the abuse, to report themselves to the statutory authorities, and to seek therapeutic help."

The instruction would make clear that "absolution for the sin of abuse cannot be given unless not only has sincere contrition been shown but the willingness to make up for the harm done has been demonstrated."

"The instruction would also make clear that in the case of a victim speaking about being abused, the confessor must listen with empathy and respect," he said. "The priest could then offer to meet the person alleging abuse outside the confessional space and encourage him or her to contact therapists and lawyers. Adequate accompaniment must be provided, given that many victims who speak about abuse for the first time feel uneasy about talking again about what had happened, particularly if it might open the area of legal proceedings."

"The seal of confession creates a sacred space in which a penitent is completely free to put before God whatever is on their conscience, and -- when they show contrition -- find forgiveness, reconciliation and healing," he said. "That the seal has in the past been a pretext for abuse and other crimes should not lead to what is a channel of grace being discarded."