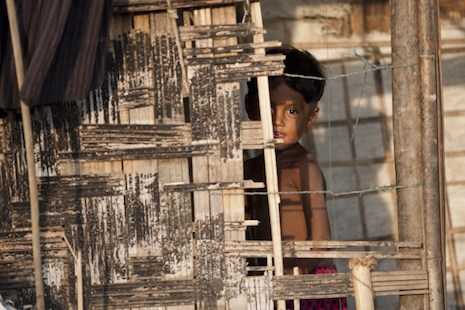 An ethnic Rohingya Muslim child looks outside his home in a camp set up outside Sittwe in Myanmar's Rakhine state in May. (Photo by Ye Aung Thu/AFP)

More than three years after the construction of makeshift refugee camps outside Sittwe, the island capital of Myanmar's religiously divided Rakhine state, the numbers have risen to about 150,000 people.

Sealed off from the rest of the area by checkpoints and heavy police guard, grinding poverty has set in amid dangerously poor sanitary conditions and almost universal unemployment.

Nearby, the local villagers — also Rohingya Muslims, but long-term residents of the vast farmlands that are home to the 10 interment camps — fear the situation will lead to clashes between the displaced people and the villagers. Some observers believe this is the government's plan: to let the Rohingya start killing each other off.

"The government has kept Rohingya Muslims in camps for years and hasn't begun to try and solve the issue. It appears to be that clashes between internees and villagers will erupt," Aung Win, a Rohingya Muslim elder from Bume village near the camps, told ucanews.com recently.

Aung Win, who works as a translator, said the government is attempting to carry out "a permanent segregation" between Rakhine Buddhists and Rohingya Muslims, who had lived together before sectarian violence erupted in June 2012, which saw dozens of people killed in the following months.

Other Muslim villagers near the camps also have raised concerns about the internees.

"My goats were stolen by the internees in the past but police are now set up near my village so they can't steal," Abdul, 45, from Ohn-Taw-Gyi village, told ucanews.com.

While Aung Win said the situation remains calm at present, limited food rations and the prolonged existence of the camps could spark the theft of animals and food supplies from villages, leading to violence. 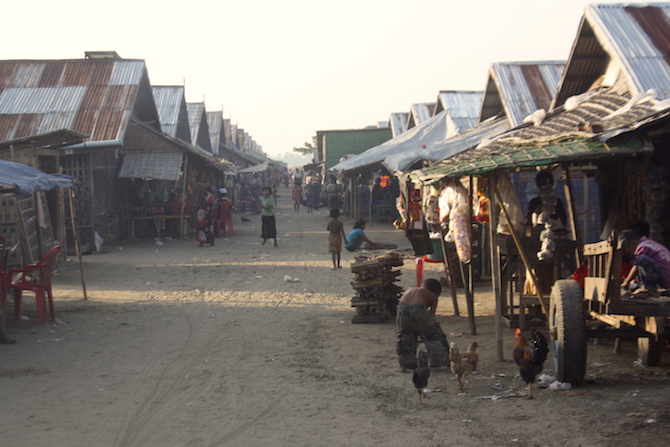 'Now we are stuck'

U Furuk didn't dream he would still be stuck in a displacement camp when he arrived at Dar Paing camp more than three years ago.

"We initially thought we would stay in [internal displacement] camps temporarily, but we have been here for more than three years. So we are very keen to go back to our respective places," said Furuk, the father of eight children.

"But now we are stuck with no job, no health care and no freedom of movement."

The Myanmar government denies the rights of the Rohingya, withholding citizenship and, early in 2015, stripping 800,000 of them of voting rights. They are branded as "Bengalis" by both sides of mainstream politics. This implies the Rohingyas are illegal immigrants from neighboring Bangladesh, despite vast numbers of them having lived in Myanmar for decades. The majority are now effectively stateless, subject to systematic abuses.

Fortify Rights, a Bangkok-based human rights organization, has called on the United Nations to establish an independent investigation into genocide in Myanmar.

"Allegations of genocide should not be taken lightly," Matthew Smith, the group's executive director, said in an Oct. 29 statement to accompany the release of a legal analysis exploring whether the persecution in Rakhine state amounts to genocide against the Rohingya.

"Rohingya face existential threats and their situation is worsening. Domestic remedies have failed. It's time for the international community to act," he said.

Hatred and bigotry toward minority Rohingya have been deeply rooted in Rakhine. In recent months, growing nationalism has also been spearheaded by hard-line groups such as Ma Ba Tha, which is led by influential Buddhist monks. The group pushed for the legislation of four new religion-based laws that are clearly targeted at Myanmar's Muslims, who make up about 4 percent of the population across the predominantly Buddhist country.

"There are many people who enter the country illegally," claimed Aye Nu Sein, vice president of the Arakan National Party, a hard-line Buddhist political group poised to do well in Rakhine in the national and state elections on Nov. 8.

"So the government needs to scrutinize them according to the 1982 citizenship law," Aye Nu Sein said. The citizenship law demands proof of generations of residency. Zeeya Ramana, 28, who lives in Paelinpyin camp near Sittwe, relies on humanitarian aid to survive. (Photo by ucanews.com reporter)

Persecution has led to a Rohingya exodus, often via a perilous boat journey to Malaysia or Thailand.

Rohingya women, men and children attempting to flee persecution in Myanmar by boat earlier this year were killed or severely beaten by human traffickers if their families failed to pay ransoms. They were often kept in hellish, inhuman conditions, according to London-based Amnesty International.

"The Rohingya are so desperate that they will continue to risk their lives at sea until the root causes of this crisis are addressed. The Myanmar government must immediately end its persecution of the Rohingya," Anna Shea, a refugee researcher at Amnesty, said in an Oct. 21 statement.

Zeeya Ramana, a weather-beaten 28-year-old from Paelinpyin displacement camp near Sittwe, said that many people leave for Malaysia each year as "we have no jobs, no cash and no farmland."

"My parents don't want me to leave for Malaysia as I need to take care of them. But we face desperate conditions in the camps and we rely on humanitarian assistance only, as I have no job," said Zeeya Ramana, who has six family members.

Rights groups predicted that the number of people taking the risky boat journey could rise after the Nov. 8 election. While the Rohingya community has now been largely excluded from the poll, the universal hope in the camp is for a victory by the opposition National League for Democracy.

But the party's local candidates in Sittwe have said that Rohingya people would need to remain in the camps while the party determined their fate, even if it won a sweeping majority in the election.

And in her only only press conference of the campaign in Yangon on Nov. 5, opposition leader Aung San Suu Kyi — whose party had deliberately selected not a single Muslim candidate around the country — downplayed the plight of the Rohingya, saying their problems "should not be exaggerated."

She posited that the whole of the country was facing a "dramatic situation."

Suu Kyi has not been to the refugee camps near Sittwe and did not venture any further than the southern part of Rakhine during her campaign — keeping well away from the problems in the north of the state.

Not only can the Rohingyas not cast a ballot in the coming election: supporting them, it seems, won't win any votes either.