The National Commission for Justice and Peace (NCJP), a human rights arm of the Pakistan Catholic Bishops’ Conference, has expressed deep concerns over the rejection of a proposed bill to stop the forced conversion of religious minorities.

The bill was drafted by the federal Ministry of Human Rights and aimed to protect underage girls from being kidnapped and forced to marry and convert to Islam as recommended by a special parliamentary committee formed by the prime minister in 2019.

In September 2021, the draft bill was rejected by the Ministry of Religious Affairs and Interfaith Harmony and Council of Islamic Ideology (ICC) because they felt it was against Islam.

NCJP chairman Bishop Samson Shukardin said the rejection of the bill is against the right to religious freedom. It would encourage criminals to use religion as a cover for the crime of abduction, rape and conversion of minority girls to Islam with impunity.

In a statement, the NCJP urged the ministry and ICC to reconsider their stance over the issue of forced conversion of girls of religious minorities while reminding the federal government of its international obligations and constitutional provisions for the protection of the rights of minorities.

Under Pakistan’s Child Marriage Restraint Act, marrying a girl under 16 or a boy under 18 is an offense but the law is often ignored in the cases of forced conversions and marriages of girls from religious minorities.

The victims face extreme fear, separation from parents and physical, mental and emotional exploitation. It is observed that parents of victims are threatened to keep silent. In fact, the crime of forced conversion involves multiple violations of human rights including freedom of religion and fundamental human rights, the statement added.

The NCJP quoted Pakistan’s constitution and the Universal Declaration of Human Rights that guarantee freedom of religion to every citizen. It also noted that Pakistan had ratified international conventions on civil and political rights and rights of the child and was duty bound to uphold them. 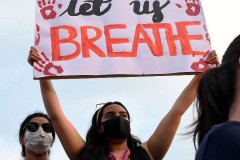