Complainant and her supporters are in danger of further victimization after the verdict, says Catholic women's group 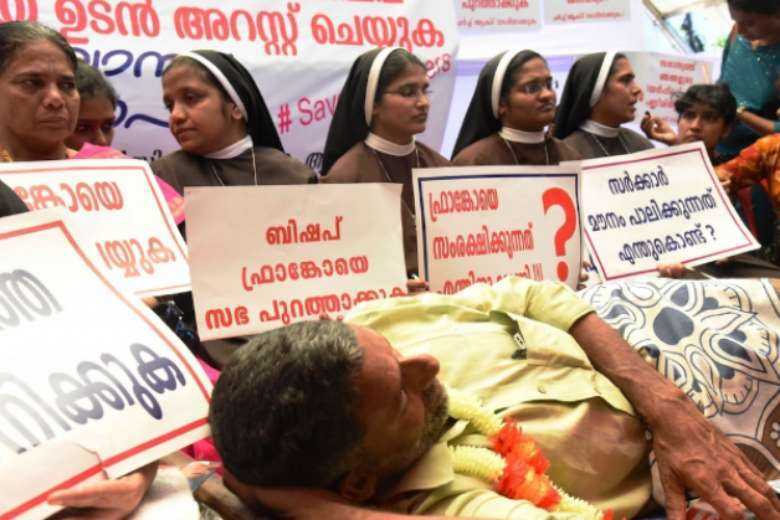 Indian nuns and their supporters at a protest in Kochi, Kerala, on Sept. 11, 2018, demanding action against Bishop Franco Mulakkal after he was accused of sexually abusing a nun. (Photo: UCA News/IANS)

A Catholic women’s group in India has urged church authorities to protect the rape complainant nun, her companions and witnesses in the Bishop Franco Mulakkal case.

Bishop Mulakkal of Jalandhar was acquitted of all charges including raping a nun from the Missionaries of Jesus (MJ) congregation by a court in Kerala on Jan. 14, with a judge saying the prosecution could not prove the allegations against him.

Sisters in Solidarity, a group comprising nuns, doctors, lawyers and other professionals, said that “they are in deep shock, disappointment and disbelief at the ‘not guilty’ verdict awarded to Franco Mulakkal.”

The group's statement dated Jan. 15 said the reaction appearing in media holding the court verdict as a "major victory for the Church" is very disturbing.

“We are pained to see how insensitively a daughter of the Church is disowned, discredited and devalued by the members of the ecclesiastical community,” the statement added.

“Is the survivor nun not part of the same Church?”

Even after she pleaded for help to church authorities at various levels, not one of them ever responded to her in any manner to understand the truth

The letter is addressed to Bishop Agnelo Gracias, apostolic administrator of Jalandhar Diocese, the five congregational provincials and the chairman of the Catholic Bishops’ Conference of India (CBCI) Office for Clergy and Religious.

The letter is also copied to Cardinal Oswald Gracias, president of the CBCI, and officials of the Conference of Catholic Bishops’ of India, Kerala Catholic Bishops' Council and the Catholic Religious of India.

The letter detailed how the nun and her companions have already suffered much within the Church, having been alienated from their mission and ostracized by the community.

“Even after she pleaded for help to church authorities at various levels, not one of them ever responded to her in any manner to understand the truth,” the statement said.

The nun and her companions experienced harassment and hostility from supporters of the accused. They have become even more vulnerable and are in danger of further victimization after the verdict, the group said.

The group also expressed its deep concern regarding the safety of Sister Lissy Vadakkel, a Franciscan Clarist Congregation (FCC) nun who was a prime witness in the case and was ostracized by her congregation at Jyothi Bhavan in Muvattupuzha, Kerala.

She remains under police protection and her frail health and isolation from the rest of the community are a matter of grave concern, the group added.

“We urge the Church, the MJ and FCC leadership to be sensitive to the survivor and her supporters to ensure their safety and dignity in this crucial time,” the letter urged.

The group hoped church authorities would comply “considering the fact that there are related cases still under investigation” and do not shift the affected nuns from their present residences “where they are provided with full protection by the concerned police stations.”

6 Comments on this Story

THOMAS KOCHERRY
The reporting of this case by the UCA reporter is not fair. It was not the nun and her companions who have really suffered over these years, on account of these frivolous case, but it was bishop Franco and the Church as a whole, which stood to lose much. Before you comment, I suggest that you read the (more than) 280 pages verdict. Every allegation by this nun was thoroughly examined by the court, a great number of witnesses examined, but thoroughly disproved. This was a case concocted by the nun to cover up some of her frivolous activities, which were being probed by the bishop. She got much support from a group of rebel priests who were and are still staging a fight against the established Church, and also from a great number of Islamic fundamentalist women in their Islamic garb. The bishop and the Church, as a whole, was put thru this great test and suffering, stage-managed by an anti-Church activist group. The judge has clearly enumerated the reasons as to why he had acquitted the bishop. Subsequent to this verdict, we have not heard of any threats being posed against this nun or her friends, in Kerala. No such report has come out. It would be better for her that she goes back to her convent, peacefully, leaving the clutches of these anti-Church groups including the extremist Islamists.
Reply

CEDRIC DSOUZA
Can you touch you heart and justify. What you say is the truth. What if the victim was one of your family member. Think before you support a false statement. The man who committed the crime is a crook. If the judge has released him as he did not have sufficient evidence. Let me tell you. He will suffer for life with regret and guilt. For the crimes he has committed. God is great.

DESMOND COUTINHO
The judgement is freely available and I have been struggling through it. The defence team which has a proven record getting rape charges nullified did an excellent job removing evidence. So all the complaints made to various bishops and the nuncio were for the most part stricken on technicalities. There is a difference between Faith and bigotry which Xtians should ponder. The Devil know the truth about God but he has no faith. Faith requires a person to become more like Christ more loving to others humble and prepared to take up the cross and follow gospel values. Regurgitating fantasies against muslims in India who are already persecuted and you might as well have added Congress and the communists has nothing to do with faith. God and the Church have no friends among unthinking bigots.

JAISON JOHN
The news is false, if anything the sister is at fault. I read the 300-page judgment given by the court acquitting the bishop, the judge concludes that the sister did not tell the truth/lied about what happened between her and the bishop, she did not produce key evidence like the sexual messages that the bishop sent. Before the trial, she said everything is stored in her mobile phone and laptop but she did not produce both in the court. In the medical examination and in the police enquiry she did not raise the accusation of rape but before media she keeps crying rape. Moreover she belongs to the latin rite, was working in a latin rite diocese, she was the mother general of a latin rite congregation and raised allegations of rape against a latin rite bishop. BUT she did not complain to the latin rite bishops/cardinal/nuncio, she complained to a syro Malabar bishop and the syro malabar cardinal who has no power over her.
Reply