Visitors have been alarmed by his frail appearance 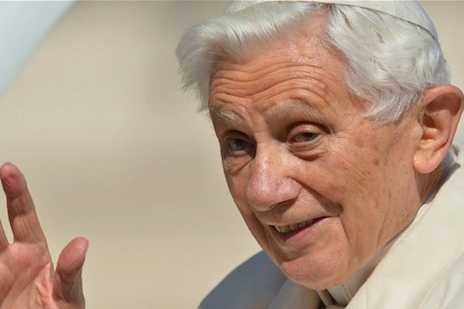 By Nick Squires for The Telegraph

Pope Emeritus Benedict XVI has lost so much weight in the last few weeks that he appears to have shrunk to "half his previous size", according to a German cardinal who visited him.

Joachim Meisner, the Archbishop of Cologne, was shocked at how Benedict's state of health had deteriorated, saying he appeared to have physically shrunk.

Cardinal Meisner went to see Benedict on March 18, the day before Pope Francis was inaugurated as his successor.

At the time Benedict was living in Castel Gandolfo, the papal summer residence outside Rome, having resigned from the Seat of St Peter on Feb 28.

"I was shocked at how thin he had become," Cardinal Meisner told the German Catholic News Agency (KNA).

"He looked like he had halved in size. At first I did not agree with his resignation. But when I saw him my reservations melted away. Mentally, however, he is quite fit, his old self."

The cardinal is not the first person to comment on the declining health of the 86-year-old former Pope, who cited his ailing mental and physical strength as the reason for his resignation, the first of a pontiff since the Middle Ages.

Last month an experienced Vatican analyst claimed that "we won't have him with us for very much longer".

Paloma Gomez Borerro, a veteran Vatican correspondent from Spain, claimed that "Benedict is in a very bad way. In the last 15 days he has undergone a tremendous physical deterioration." Vatican insiders said her remarks were overly "alarmist", but conceded that in the last few months he had become weaker.

Benedict looked frail when he was visited by Pope Francis at Castel Gandolfo before he moved back to the Vatican to take up residence in a former convent in the grounds of the city state.

Last month his brother, Georg Ratzinger, told The Daily Telegraph that Benedict was "relieved" to no longer be Pope.

Father Ratzinger, 88, who is a priest, said his younger brother "still suffers the problems of the Church, but is really relieved to no longer have the weight of the Church on his shoulders."

He denied, however, that Benedict was suffering from any particular illness.

Full Story: Pope Benedict 'has lost half his weight'