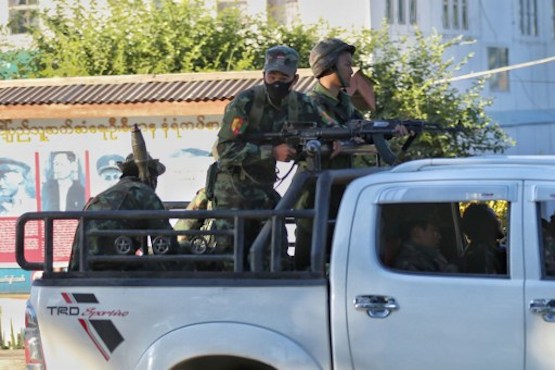 Myanmar government militia belonging to the Border Guard Force on Nov. 22, 2016 patrol Muse town located in Shan State after clashes between the military and ethnic insurgents increased. (Photo by AFP)

The Kachin Baptist Church has voiced grave concern over the welfare of an assistant pastor and a youth leader who went missing on Christmas Eve after being summoned by the military in Mong Ko, in Myanmar's conflict-torn Shan State.

Dumdaw Nawng Lat, assistant pastor and his cousin, Gam Seng, a KBC youth leader in Mong Ko, disappeared after they left church premises to meet with the military.

Local activists said the two church leaders had helped local reporters cover the situation in Mong Ko, where intense fighting between the military and ethnic armed groups had taken place since Nov. 20.

Zau Ra, a Kachin Baptist Church official in Muse Township, said that the families of the missing men and witnesses filed a case at Muse police station on Jan. 3 and the police were treating it as a missing persons case.

"We are concerned that the two church officials remain missing and don’t know exactly where they are as no one dares to search amid the tense situation in the town," says Zau Ra.

"According to our ground report, they were taken by the Kachin Independence Army, not the military," Zaw Htay told ucanews.com.

Mong Ko, a town in northern Shan State near the Chinese border, is the scene of intense fighting after violence erupted between the military and four ethnic groups known collectively as the Northern Alliance, which includes the Kachin Independence Army.

Military air strikes and heavy bombardment has led to more than 15,000 people fleeing to China.

But state media reported that the church was destroyed due to an explosion caused by ammunition stored there by armed groups.

Bishop Philip Lasap Za Hawng of Lashio released a statement on Dec. 22, saying that the claim the church was an ammunition storehouse for the Northern Alliance was "fabricated" and that Myanmar’s military previously took responsibility for bombing the church building.

An army tactical commander in Mong Ko rang the parish priest, Father Dau Hkawng, on Dec. 8 to say that the Catholic Church had been hit during air strikes and that the military would take responsibility for repairing it, according to Bishop Philip’s statement.