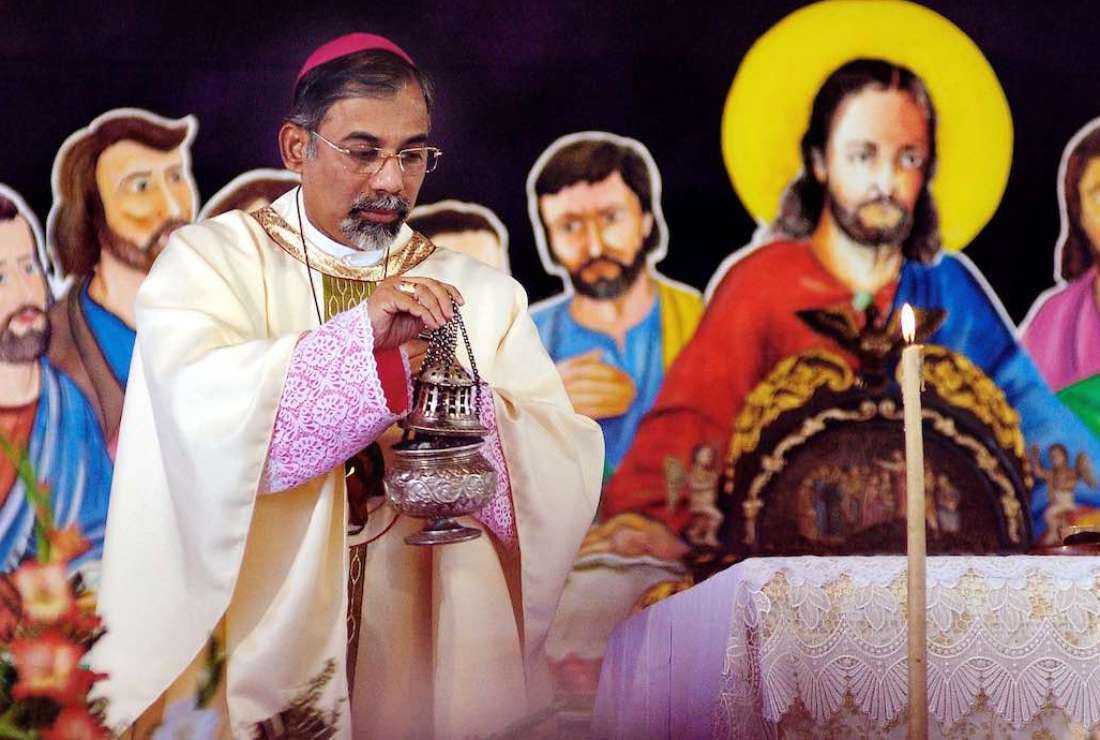 Cardinal Filipe Neri Ferrao, Archbishop of Goa, offers incense during a religious service held during the exposition of the body of St. Francis Xavier in Old Goa, on Nov. 21, 2004. (Photo: AFP)

“Our Catholic educational institutions are getting more and more communalized,” with the backing of the ruling pro-Hindu Bharatiya Janata Party (BJP) at the state and at federal level, says Jesuit Father Anthony Da Silva, director of Xavier Centre of Historical Research in Goa.

The aim is to push forward the pro-Hindu ideology on Christian educational campuses, the Jesuit priest alleged.

Father Da Silva was particularly referring to a recent incident in which some members of BJP’s student wing created tension in the Church-run St. Xavier’s College by shouting slogans and disrupting classes. The college comes under the archdiocese of Goa and Daman.

The members of ABVP (Akhil Bharatiya Vidhyarthi Parishad or All Indian Students Forum) were protesting the college authorities’ refusal to induct the new Student Council in the college after the pro-Hindu students’ wing won the council elections held in December for the academic year 2022-23.

It was an “unfortunate and unprecedented incident” in the 60-year-old college, according to Father Tony Salema, the college administrator.

The protestors also refused to follow police directions, and the college management sought the help of the deputy collector to bring the situation under control, Father Salema said in a statement.

“For the first time, we had a cultural shock with the political sloganeering,” said Father Ramiro Luis, assistant professor of psychology at St Xavier’s.

More than 2,000 students currently study in the college, set up in 1963, two years after the 450-year Portuguese rule ended in Goa.

“Now, BJP is using its student wing to show its muscle power and to spread its ideology in Catholic institutions,” Father Ferrao, told UCA News.

Father Ferrao said the ruling party was trying to establish a foothold in Christian institutions.

Frederic Noronha, journalist-publisher and former student of St. Xavier’s said the BJP was “trying to infiltrate all branches of the administration, including bureaucracy, police, media, and the legal system and educational institutions.”

Father Da Silva said the tone was set last year by state Chief Minister Pramod Sawant, who appointed a committee to prepare the list of Hindu temples destroyed by the Portuguese rulers.

The government has set aside a huge amount of money to achieve this aim, the priest said, adding that the diverse activities should be seen in the background of the BJP’s proclaimed goal of turning India into a nation of Hindus.

Goa was once considered the center of the Catholic mission in Asia, particularly after the Goa diocese was established in 1533. The diocese at the time had jurisdiction from the Cape of Good Hope in South Africa to China and Japan.

Catholics once dominated Goa’s socio-political activities but currently, they form only some 25 percent of the state's estimated 1.5 million people. Hindus are a dominant community forming 65 percent of the population.