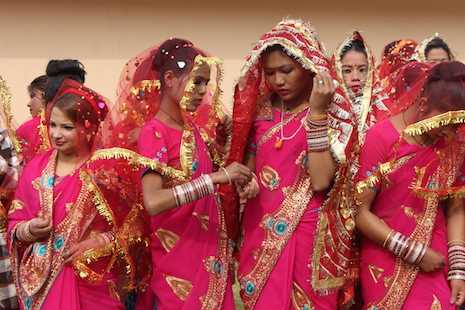 Five years after his eldest daughter married, Nawal Paswan, 41, is still paying off interest on a hefty loan of Rs 300,000 (US$3,000) for the dowry. Paswan, a construction worker from southern Nepal where the dowry system is rampant, had to give cash and gifts to the groom and his family to make the marriage happen.

“I had no option but to take out a loan to marry my daughter and fulfill the demands put by the groom and his family,” he said. The expense has taken its toll on Paswan, a member of the Dalit Madheshi community in Bara district, who is the sole earner in his family of five and earns about Rs 500 per day.

“Even after five years, they have not stopped demanding gifts from us. But we cannot afford to give anything now,” said Ranju Paswan, 39, Nawal’s wife.

Their first daughter’s dowry depleted the family’s savings. And so when it was time to marry off a younger daughter, the couple turned to one of the mass wedding ceremonies gaining popularity across the region among those bankrupted by dowries.

On Sunday, 21-year old Rinku married 24-year-old Jitendra Paswan inside the famous Pashupatinath Hindu temple in Kathmandu. They were among 100 couples wedded in the ceremony organized by the Shiva Shakti Rahuleshwaranand Foundation, an Indian-based charity that has been helping economically disadvantaged and marginalized communities to take part in mass weddings.

“I was informed about this event by one of the members of the foundation in my village. I discussed this with the members of my to-be son-in-law’s family and then we both agreed to take part in the mass wedding to save money,” Nawal said. Many impoverished parents are unable to pay the hefty sums demanded by prospective grooms and their families. But after failing to bring a dowry, a woman will often suffer life-long physical and mental persecution at the hands of her husband and in-laws.

Bara district is known as a hotspot, with increasing numbers of domestic violence and abuse cases being reported by women after they fail to bring enough dowry to their in-laws. Such mass wedding ceremonies aim to lessen the rates of violence.

On Sunday, the venue in Pashupatinath hosted 100 Mandaps, or wedding tents, each of them showcasing a bride and a groom along with a priest chanting mantras. The 100 couples, mostly poor Dalits and indigenous peoples, took their vows en masse.

According to Anil Basnet, the coordinator of the event, the ceremony was held to help break families from the detrimental system.

“We wanted to raise voices against the existing ill-practices such as the dowry system and caste-based discrimination and at the same time help poor families who cannot afford to marry off their children due to poverty,” Basnet said. The organizers also provided each couple with a range of goods including the wedding outfits.

“We made sure that the bride’s family taking part in the wedding will not pay any dowry to the boy’s family and that there are no exchanges of expensive gifts as well,” Basnet said. While mass marriages for the impoverished are already commonly practiced in India and Pakistan, Sunday’s event was a first in Nepal.

“The dowry system is getting more problematic throughout the country with more extreme forms among some specific ethnic communities and this is increasing the cases of dowry-related violence such as abuse, physical and mental torture and even murder of brides,” said Suresh Dhakal, a sociologist with the Tribhuwan University of Nepal.

“Despite the fact that dowry is considered a social crime, the practice is still rampant because of the lack of strict action and punishment [for dowry-related crimes] under the existing law,” he said. According to police data, around 170 women were killed last year in Nepal, and the majority of cases were related to dowry-based violence. The number of cases has also been steadily rising over the past few years.

The proposed Controlling Domestic Violence (Crime and Punishment) Act will specifically criminalize violence against women in the name of dowry, and the perpetrator or perpetrators could be jailed for up to 10 years and fined up to Rs 100,000.

On average, around 250 cases of domestic violence against women are reported each year in Nepal and more than 50 percent of such cases are related to dowry, said Renu Rajbhandari, founder of the Women’s Rehabilitation Centre (WOREC).

Women are abused both physically and mentally. In some cases, they have been set on fire or even beaten to death for not producing the dowry demanded by the groom’s family.

Last May, the case of Rihana Sheikh Dhapali attracted national and global attention toward the dowry problem after the pregnant woman was set on fire for failing to bring a buffalo and motorcycle as dowry.

Since then, WOREC in coordination with local government bodies and partners, has launched a ‘No Dowry Campaign’ in South Nepal to raise awareness and urge stricter law enforcement and punishment for perpetrators of dowry-related violence.

But the battle is very much an uphill one. In spite of continuous efforts to educate and empower girls, dowry-related abuse appears to be on the rise said Chandtara, the NWC chairwoman.

“The dowry has become a tool of economic exploitation against not only poor and uneducated women but also among educated ones.”