Tesiana Anur from the Indonesian island of Flores suffers from a rare form of blood cancer. She is now being treated at Sanglah Hospital in Bali. (Photo supplied)

A week after her birth, several small dots appeared next to the left eye of Tesiana Anur, a 10-month-old girl from East Manggarai district on Indonesia’s Catholic-majority island of Flores.

At first, her parents thought they were mosquito bites. "We were not concerned about them," says Susantiana Abul, her mother.

However, they began to worry as the dots slowly got bigger and formed a lump, prompting them to take their daughter to the nearest clinic.

The doctor advised them to take her to a hospital. However, Abul and her husband, who works as a motorcycle taxi driver, chose to seek traditional medicine because of a lack of money.

“As a mother, I was tormented by her suffering. We could only pray to God that she would be healed,” she told UCA News.

Anur's condition became worse each day. She had difficulty doing things and had a persistent cough, while the lump continued to spread, covering half of her head.

A ray of hope came last month when Milianus Jegaut, a young relative of the couple living nearby, posted photos of little Tesiana on his Facebook, which attracted the attention of netizens and some local media.

The news about her then went viral, prompting many to urge her family to rush her to hospital and donations to flow in.

Pankarius Purnama, a member of the Catholic Youth group in Ruteng Diocese, said that after seeing Tesiana 's photo the group immediately discussed how they could help her.

"We decided to pray for her recovery while seeking donations,” he said. 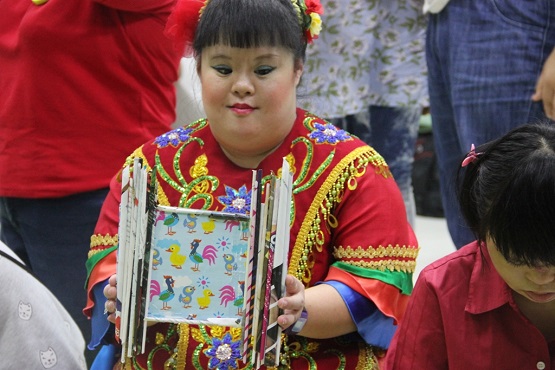 Indonesian children with Down syndrome find joy in life Their efforts, he said, were then endorsed by the chairman of the Diocese’s Youth Commission, Father Benediktus Gaguk, which enabled their campaign to reach more people.

Meanwhile, other groups and individuals in other cities began to contribute.

Julian Avista, from Jakarta, said she chose to donate money as a way of saying thank you to God for the safe delivery of her daughter.

"I was deeply moved when my husband told me about that baby [Tesiana],” she told UCA News.

“I am sure her parents expect their child to recover and I really hope that happens,” added Avista, whose own daughter was born on Aug. 13.

Ambrosius Adir, a local journalist, said that besides writing about Tesiana he contacted many people to try and help her. "I felt a call, not only to write about her suffering but also to provide help," he said.

The East Manggarai district government has also helped and issued her with a social security card that helps with hospital expenses.

With the help of funds raised in less than a week, Tesiana was taken to a local hospital in Ruteng where she was diagnosed with cancer. She also had problems with her lungs and liver and she had to be referred to a more modern hospital in Bali.

Jegaut, who accompanied Tesiana and her family to Bali, said doctors had diagnosed her with a rare blood vessel cancer. But after several weeks of treatment, her condition has improved.

“Her heart and lungs are better and she looks more cheerful. She can eat and is more stable, which is a good sign,” he said.

"Now the family must decide whether she will undergo chemotherapy or surgery,” he said.

In the meantime, donations are still coming in. "We have received more than 85 million rupiah [US$5,800],” he said.

Tesiana’s father Agustinus Ndelos said he will be eternally grateful for the help received and love shown for his daughter.

"I didn't imagine that we could get this far in helping our baby fight this disease," he said.

Her mother said it would be the will of God that will prevail in the healing process.

"We desperately hope our daughter will recover. But we entrust it all to God. What we can do is give her the best. We are strengthened by the solidarity and compassion shown by many people,” she said.