Communities test the limits on freedom to worship

Signs of hope for religious freedom in Vietnam 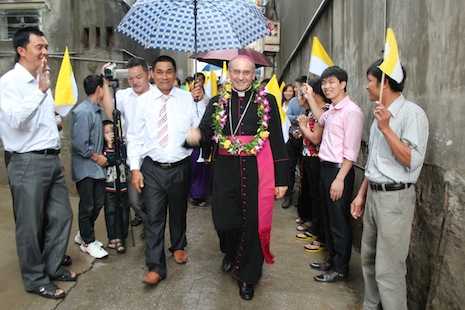 The continued detention of three Christian bloggers on charges of undermining the state has sparked criticism and concern over increasing religious intolerance in the country. Late last month, a Catholic blogger told international media that he had been beaten near his home in Hanoi in an attack that he says was linked to local police. There are also allegations that Catholic students are isolated and ostracized by classmates and teachers. But Catholic communities in three northwestern provinces of Dien Bien, Lai Chau and Son La say they have been able to practice their faith without government interference and hope the groundwork is being laid for greater tolerance. Since 2009, about 50 Catholics have gathered each day for evening prayers at a makeshift chapel in Son La city outside Hanoi. Three priests from neighboring provinces also make monthly visits to celebrate Mass for a congregation of about 300 people. Joseph Trinh Van Thuy, who began using his home for a chapel in 2005, said the community meets regularly to worship, despite having no official permission. “We freely gather at our houses and practice our faith without interference,” said Thuy. He said the community saw some improvements after a delegation from the U.S. Commission on International Religious Freedom visited Son La in 2009. “We asked the visitors to work with the Vietnam government to stop discrimination against local Catholics and repressing religious activities at their chapel,” Thuy said. Thuy, a building contractor and father of six, said he moved to the area in 1978 from Ninh Binh province. For three decades, his family practiced their faith in secret, due to fear of government reprisals. During this time, they had to travel 500 kms back to their home province to attend confession and Mass at Christmas and Easter. "In the past, local Catholics who were caught gathering for worship or prayer were questioned, threatened and prevented from doing business," Thuy said. “We continue to gather for prayer in a brave and persistent way, so government authorities ignore our activities." Thuy singled out former Archbishop Joseph Ngo Quang Kiet of Hanoi for particular praise. Over three decades, the archbishop made efforts to intervene with city authorities on behalf of local Catholics. A lay missioner from Moc Chau said there are about 7,000 ethnic Kinh and Hmong Catholics in eight communities in the three provinces. “The government has not recognized them but has not prevented them from practicing their faith,” said the missioner, who asked not to be named. Francis Nguyen Ba Huan, who uses his house as a chapel in Dien Bien district, said local Catholics also provide food and accommodation for hundreds of Hmong Catholics who have to travel 200 kms to the chapel for services. In late August, Archbishop Leopoldo Girelli, non-resident papal representative to Vietnam, along with Bishop John Marie Vu Tat of Hung Hoa and eight priests visited and administered confirmation to 500 people at five chapels in Son La and Dien Bien provinces. The delegation also visited two other Catholic communities but did not celebrate Mass, as the local government did not allow them to. Plain-clothes security officials took photos and videoed the delegation during their five-day visit but they did not interfere. During the visit, Archbishop Girelli promised to work with the central government to recognize local Catholics’ activities and allow them to build churches to meet their religious needs. Related Reports Judge postpones trial of three bloggers Christian activist's mother sets herself ablaze