Following its recent religion summit, China’s propaganda chief aims to control the hearts and the minds of Christians 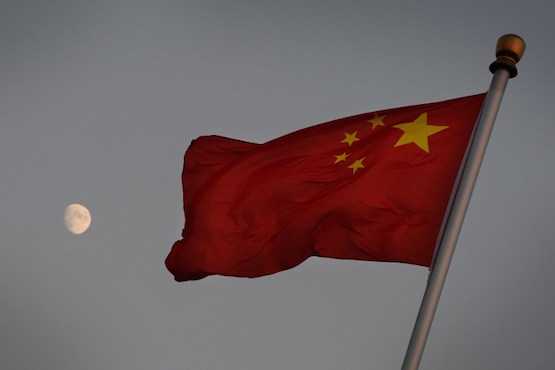 A file photo of the flag of the People's Republic of China as seen in Tiananmen Square, Beijing, Dec. 13, 2013. The flag's predominant red color represents the communist revolution. (Photo by AFP)

The Communist Party in China has taken its first visible steps to extend more control on Christianity in the country by replacing crosses torn from churches in eastern Zhejiang province in recent years with the national flag, propaganda bulletin broads and stationing party members at each religious venue.

National flags have been put up at all 69 religious sites in Lanxi, including the Christian churches in Zhejiang after a cross-removal campaign that has been running since 2013 appears to have ended.

During the campaign, about 1,700 crosses were removed from Protestant and Catholic churches.

Officials of the United Front department that oversees religious affairs updated their progress daily with a picture and text description on each venue where the flag posting was completed, according to a post on the Zhejiang's Ethnic and Religious Affairs Committee's website June 16.

The religious sites in Lanxi will have to hold a flag-hoisting ceremony and sing the national anthem at every important festival and holiday to "enhance patriotic education," the post added.

Besides Lanxi, that comes under the jurisdiction of Hangzhou diocese, two neighboring dioceses in Zhejiang, home to about 2 million Christians, one-tenth of who are Catholics, also received a similar notification.

"Our church in Meitou county has also been notified to get registered, hang a national flag, put up a bulletin board for religious policy propaganda and to have a party member stationed there," an underground Catholic source in Wenzhou who asked not to be named told ucanews.com.

"It is to tighten control, to turn us into a party's religion," said the Wenzhou source. "This is to force the Vatican to show its stance and if the Vatican condemns China the Chinese authorities would blame it for being insincere," he added. National flags have been posted at all 69 religious sites in Lanxi city, Zhejiang province as of June 13. (Screengrab of Zhejiang's Ethnic and Religious Affairs Committee's website)

Vatican and the Chinese authorities have picked up speed in their negotiations to resolve the thorny issue of the China Church as delegates from two sides have already met twice this year.

The requirement is believed to be implemented across the province in response to the National Conference for Religious Affairs on April 22-23, during which Chinese President Xi Jinping stressed that the party's religious policy must be followed.

Ying Fuk-tsang, director of Divinity School of Chinese University of Hong Kong, told ucanews.com that the flag hoisting is to further implement patriotism in religious sites and to strengthen the leadership of the grassroots party officials on religious affairs. It is also to further realize the rule of law in churches, he said.

"The flag is just symbolic. Having a party member stationed in the religious site is more noteworthy as what role would this person play? Is it to infiltrate the congregation?" said Ying.

A researcher who asked not to be named told ucanews.com that these moves of "sinicization" should be expected as the April conference, and the recently released inspection findings of the party's anti-corruption watchdog on June 8, have implied that the Politburo is unhappy with the work of the State Administration for Religious Affairs (SARA).

The inspection team found "outstanding problems" with the SARA including a weak central leadership role, non-implementation of the party's religious policy, not paying enough attention to national religious groups as well as a lack of supervision over them.

Besides Zhejiang, the national flag was also raised at 30 religious sites in Huangshi city in central Hubei province in May 2015.

Even though just symbolic, flying the national flag at religious sites is controversial as some believers argue that it is a violation of the separation of church and state.

A source in Ningbo Diocese told ucanews.com that their parish has been asked to hoist the national flag, erect religious propaganda bulletin boards in the church compound. "Some parishioners are unhappy. The parish leaders are negotiating with the government officials," the source said.

While the June 16 post said a flag pole would be placed according to relevant laws, images from the religious affairs committee's website showed flags hanging from inside and not outside the Salvation Church and Lanjiang Church, two Protestant churches.