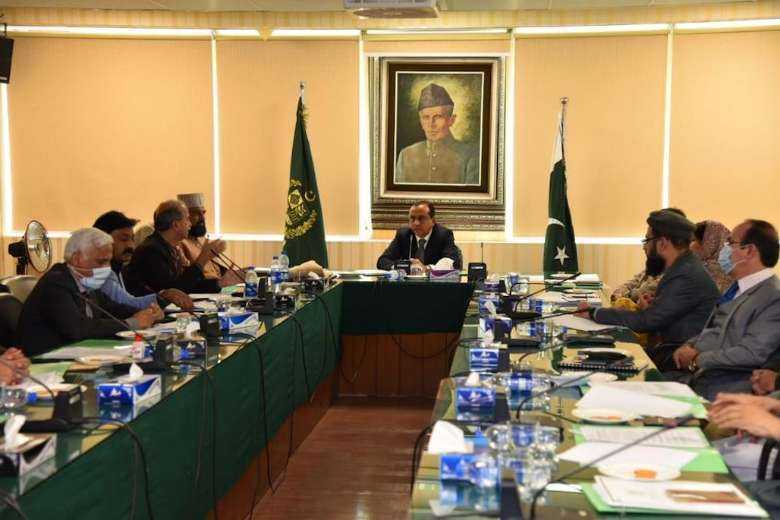 Chairman Chela Ram Kewlani presides at the eighth monthly meeting of the National Commission for Minorities in Islamabad in February. (Photo supplied)

Minority and education rights groups have expressed dismay at Pakistan’s National Commission for Minorities (NCM) for rejecting a recommendation to exclude Islamic topics from compulsory textbooks.

Chela Ram Kewlani, the Hindu chairman of the NCM, rejected a report by a Supreme Court-appointed commission that suggested all Islamic content from the Single National Curriculum should be exclusively placed in the textbooks of Islamic studies/Islamiyat, a subject compulsory only for Muslim students.

“Islamic content in English and Urdu textbooks amounts to religious instruction, which no non-Muslim student can be compelled to study,” stated the report.

Saqib Nisar, former chief justice of Pakistan, created Dr. Shoaib Suddle's one-man commission in 2019 to push the federal and provincial ministries and departments to implement the Supreme Court’s 2014 landmark judgement on religious minorities. A key recommendation was to reform the curriculum.

Ram expressed “complete disagreement” with Suddle, adding that the one-man commission has nothing to do with the NCM. Mutual respect and knowledge about each other’s religion is a must for interfaith harmony, he said.

Church officials in Pakistan often complain about hate material in the curriculum and an overemphasis on Islam in the education system, often with a bias against non-Muslims.

The NCM cannot ignore the interests of minority students in education

“Mr. Ram apparently was uninformed of the opinion of educationists, the recent directions of the Supreme Court as well as Pakistan’s constitution on the subject. The NCM cannot ignore the interests of minority students in education,” stated the People’s Commission on Minority Rights (PCMR), a civil society group, in a press release issued on April 22.

“By doing so, the NCM will betray the trust of religious minority communities whose children have for years been subjected to a forced teaching of Islamic studies in schools.”

On April 1, Punjab’s Human Rights and Minorities Affairs Department asked the Punjab Curriculum and Textbook Board to shift all Islamic content — including naat (a devotional hymn to the Prophet Muhammad) and topics on his life — to Islamiyat.

Article 22 (1) of the constitution prohibits the teaching of a religion to students other than their own.