Arvind Kejriwal, chief minister of Delhi, lights a lamp during a function in New Delhi to mark the centenary of the All India Catholic Union on Aug. 23, 2019. (Photo supplied)

The Election Commission of India has turned down a request to change the election date in West Bengal and Assam from Maundy Thursday.

The All India Catholic Union (AICU), the largest laity movement in Asia, submitted a petition asking the commission to reconsider holding polls on April 1, the day before Good Friday, in the eastern and northeastern states.

“He said changing the date is not possible at this stage as all the necessary arrangements have already been made in West Bengal and Assam states,” AICU national coordinator A.C. Michael told UCA News.

“However, he assured us to check the dates for elections in Meghalaya and all the northeastern states where Christians are the majority for future elections."

It marks the day Jesus Christ celebrated his final Passover with his disciples. It is believed that Jesus on this day washed the feet of his disciples during the supper.

The term "Maundy" is derived from the Latin word mandatum, which means commandment. It refers to the instructions that Jesus gave to the disciples before his betrayal by Judas.

Meanwhile, voting for the legislative assembly in West Bengal will take place in eight phases starting on March 27. The second phase is on April 1. Counting of votes will take place on May 2. 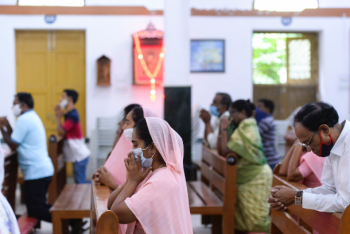 The AICU, the official lay organization recognized by the Catholic Bishops’ Conference of India, was founded in 1919 in what was then Madras, now called Chennai.

The two eastern rites have their origins in Kerala and are also present all over India and in many other parts of the world.

The AICU is active in propagating the social teachings of the Church, which have evolved over the decades to equip the people to play a meaningful role in the Church, community and secular society.