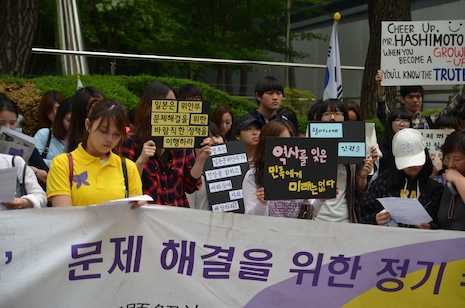 Participants at the regular Wednesday rally in Seoul

Former comfort women from South Korea will meet Toru Hashimoto, the mayor of Osaka, who recently tried to justify Japanese crimes of sexual slavery in World War II as a ‘necessity.’

Kim Dong-hee, secretary general of the Korean Council for the Women Drafted for Military Sexual Slavery by Japan, said today that two comfort women in their 80s applied for a face-to-face talk with Hashimoto in Japan. Hashimoto accepted the request and the meeting is scheduled for May 24.

The ultra-right wing Japanese politician’s assertion that comfort women were necessary for the morale of Japanese soldiers caused outrage when it was released on May 11.

This was aggravated on May 18 when a senior member of the Japan Restoration Party, which Hashimoto co-leads, said that the comfort women wee not sexual slaves but prostitutes who followed the military for money.

The United Nations has officially declared that the so-called comfort women system was "military sexual slavery during the wartime" and "a systematic and deliberate crime" by the Japanese government, which has denied its official responsibility for it.

Kim lambasted the government for “historical distortion, lack of historical understanding and those absurd words. However,” Kim continued, “the Japanese government is neglecting the victims’ rights and is even joining in with those malicious comments.”

The two former comfort women who are due to meet the mayor left for Japan on May 18 and held rallies in Okinawa, Hiroshima and Okayama in cooperation with a Japanese support grouo. They will go to Osaka on May 24 and back to Seoul on May 27.

At the weekly Wednesday rally, the 1057th of its kind, held in front of the Japanese Embassy in Seoul, participants criticized the Japanese politicians for their thoughtless words.

Park Eun-hwa, 67, shared the appalling experience endured by her mother.

“My mother had to marry at the age of 14 to escape being procured as a virgin during Japan’s colonial rule. They procured girls even in remote mountainous villages like my hometown,” she said.

“The word ‘procurement’ should be used for things or animals, not humans. I have heard these kinds of story so many times.” she added.

Precise figures from the wartime period do not exist, but an estimated 50,000 to 200,000 women from Japan’s occupied territories, mostly Korea, were forced into sexual slavery.