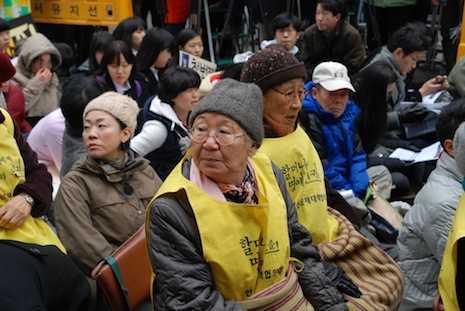 Former comfort women at a regular Wednesday rally in Seoul

Two former South Korean comfort women have called off a meeting with Toru Hashimoto, the mayor of Osaka, who recently claimed Japanese crimes of sexual slavery during World War II were a ‘necessity.’

Kil Won-ok, 84, and Kim Bok-dong, 86, say Hashimoto is not willing to express regret and apologize for his comments on comfort women.

It has been widely reported that thousands of women were used as sex slaves in countries occupied by Japan during World War II. The two women, who were on a tour of Japan to describe their personal wartime experiences at several rallies, were due to meet the Osaka mayor in Japan today.

In a statement the two women said they had decided to meet him on the understanding that Hashimoto would withdraw his remarks on comfort women and apologize.

However, they say they were told that the Japan Restoration Party, which Hashimoto co-leads, was not prepared to withdraw Hashimoto’s comments. They were also reportedly told by Japanese journalists that Hashimoto only wanted to use the meeting as a photo opportunity to quell the international outrage his comments generated.

“We decided there was no need or reason to meet Hashimoto who wants to conduct impromptu propaganda rather than heartfelt reflection. We refuse the face-to-face meeting with him,” the women said.