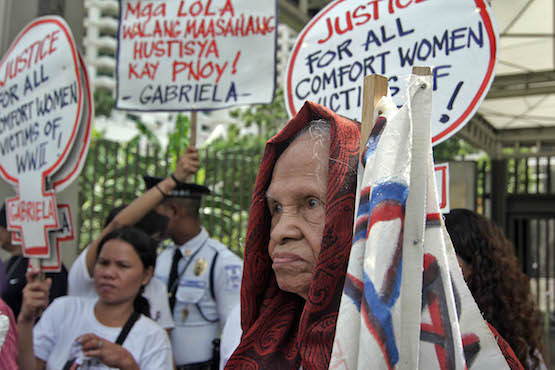 Former Filipino comfort women hold a protest outside the Japanese embassy in Manila in this August 2015 file photo to mark the anniversary of the end of the Second World War. (Photo by Vincent Go)

Former Filipino comfort women protested the signing this week of a defense agreement between the Philippines and Japan.

"Their plans have deadly consequences for our country, already proven when Japanese soldiers invaded our lands during the [Second World War]," said Richie Extremadura, , coordinator of the comfort women group Lila Pilipina.

The agreement "will raise the specter of sexual abuses against women and children," Extremadura.

The Philippines signed an agreement with Japan on Feb. 29 that would pave the way for Tokyo to transfer defense equipment and technology to Manila.

Extremadura questioned why Manila was so eager to sign the agreement when it was so reluctant to help women who were forced into sexual slavery by Japanese occupation forces during the war.

Philippine Defense Secretary Voltaire Gazmin said the agreement will boost the strategic partnership between the Philippines and Japan.

He said the agreement would also contribute to regional peace.

Japan, like the Philippines, is involved in a maritime dispute with China.

Both Tokyo and Beijing lay claim to a group of islands in the East China Sea, while China and the Philippines are at loggerheads over territory in the South China Sea.

On Mar. 2, two Japanese warships arrived in Manila for a port visit, which military officials said would enhance ties between the countries’ navies. "It is another manifestation of a sustained promotion of regional peace and stability," said Philippine Navy spokesman Commander Lued Lincuna.

Activist group, the International League of Peoples' Struggle, however, criticized the arrival of the warships, describing the port call a part of the "rising militarism of Japan."

Various groups in the country, including the Catholic Church, have been calling on the Philippine government to do more to help the former comfort women who were forced to work as sex slaves during the Japanese occupation of the Philippines.

More than a million Filipinos died during Japan's invasion of the Philippines during the Second World War.

Some 300 Filipino women claimed in the 1990s that they were forced to work in wartime brothels by the Japanese military.

"Japan remains unapologetic to the demands of our comfort women for recognition and restitution, and yet it readily expends huge resources and political force behind a costly war preparation," said Extremadura.