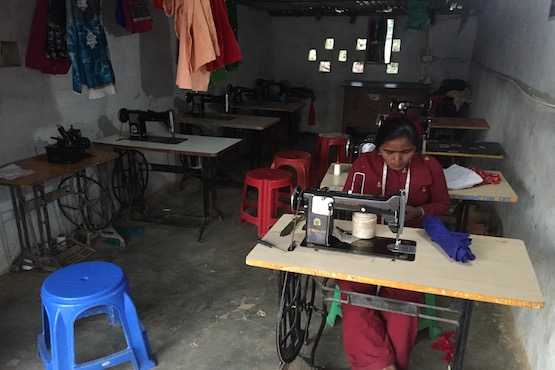 A woman working at the Caritas run center that helps women in Kathmandu. (Photo supplied)

Janaki Sarki was 12 years old when her grandmother told her she was going to be married within a week.

Sarki, from Babiyachaur village in the remote, picturesque Surkhet district of West Nepal, had been looking forward to her first day at school as a sixth grader.

But she was told she would have to stay at home.

"This sudden announcement came as a big surprise to me," says Sarki, who is now 26.

"I did not know how to react then."

Sarki and her three younger siblings were living with grandparents while their parents worked as daily wage migrants in India.

"I did not want to get married but my grandparents kept on saying that they were old and wanted to see me married before they died," Sarki said.

"They believed that they would go to heaven if they saw me married off young."

Sarki was forced into an arranged marriage with an 18-year old from another village in the same district, which is about 600 kilometers west of the capital, Kathmandu.

Her husband worked as a cobbler to support his family.

"I was not allowed to continue my schooling," she said.

Although still a child, she was burdened with household chores such as taking care of livestock and carrying fodder from the forest.

"Life was too hard," she recalls.

Sarki spent little time with her husband as he left five days after her wedding to work in a nearby town.

In the absence of her husband at home, in-laws treated her badly and made her work like a slave.

Only when her husband came home every two or three months was she treated well, Sarki relates.

After three years of marriage, Sarki, then 15 years old, was informed that her absent husband was seriously ill with typhoid.

Her in-laws refused to pay for her to visit him and he subsequently died from the disease.

Sarki remembers that she cried a lot.

The young widow’s ordeal did not end there and then.

"My husband’s family blamed me for his death and called me bad names," she says.

"I was still in shock by what happened yet I was not spared."

Following her husband’s death, it became intolerable for Sarki to stay with her in-laws so she returned to her parent’s home.

It was there that Sarki came into contact with a local organization providing training to young girls and women.

And she grasped the opportunity in order not to be a burden on her poor parents.

Caritas Nepal has since 2015 implemented the ‘Children and Youth Empowerment Program’ in four districts of western Nepal, including Surkhet.

In this area there are high levels of child marriage, youth migration, gender violence and other forms of domestic violence.

The program, in collaboration with other aid providers, creates thousands of so-called youth entrepreneurs as well as helping to keep children in school.

Sarki is one of 40 beneficiaries of the program providing loans to support youth-led entrepreneurship.

Now, she has five sewing machines, earning some US$200 per month, and is assisting 15 other women to learn tailoring.

Although Nepali law sets 20 as the minimum age for marriage, the mountainous nation still has one of the highest rates of child brides in the world.

Pabitra Shahi, executive director of the Awaaz human rights organization in Surkhet district, said there are a host of reasons why early marriages continue.

They include family pressures, religious beliefs and the implications of widespread poverty.

Shahi also cites as a factor an increasing tendency towards ‘love marriages’ among adolescents without proper guidance and counseling.

"Each month we intervene in three to five child marriage cases in the Surkhet district, but most of the time cases go unreported," she said.

Shahi called on elected politicians to do more to stem the practice.

Janak Sharma, regional manager at Caritas Nepal, points out that child marriage is most prevalent in poor Dalit communities, formerly known as untouchables.

Girls from impoverished families dropping out of school remains a contributing factor.

"I always dreamt that one day I would be able to do something for others," Sarki says when recalling the passage of her life since being taken out of school to marry at the age if 12.

"Now, I am helping fellow women with sewing skills to earn a living of their own."

And perhaps best of all, a month ago Sarki remarried to a young man of similar age to herself and is finally happy.