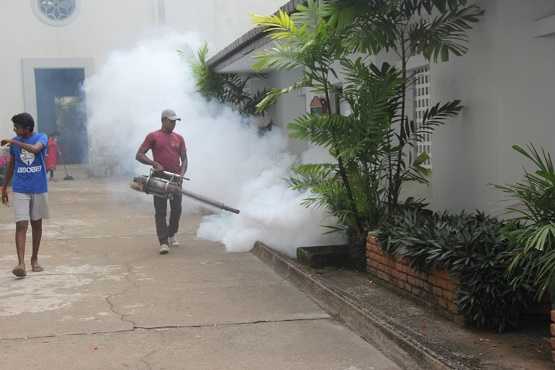 Rose Mary, a Catholic mother of two, lives in a shanty town in Bloemendhal, a suburb of the Sri Lankan capital where outsiders, even residents, go to throw away their garbage.

"People know our area because of the big garbage dump," said Mary.

Sri Lanka's biggest garbage dump was located 100 meters from where she lived until a few years ago when it was moved to another area. "Now we have to put all the garbage in front of our houses which increases the threat of dengue fever," Mary said.

"Our children suffer from the stink and contract health problems," she added.

Solid and hazardous waste is unloaded into open dumps in many parts of Colombo. Garbage is also burnt in the open air polluting the atmosphere and poisoning the water.

Mary and her neighbors organized themselves for their shramadhana (cleaning the area) on Jan. 22, which was part of the local Catholic Church's effort to fight the spread of the disease.

"If we get support from municipal officers we can clean up the garbage but sometimes it remains for months and months," she said.

Dengue is spread by mosquitoes that thrive in standing water and small puddles, making garbage dumps a haven for their breeding habits. Cardinal Malcolm Ranjith of Colombo, distributing garbage bags among people on Jan. 22 which he made a special day of cleaning to prevent the spread of dengue fever. (Photo by Niranjani Roland)

"Therefore, cleaning and draining the water from these types of containers is the most effective way of reducing the mosquitoes' breeding ground," he said.

When the garbage is collected and moved it spreads the disease around the city. Dengue symptoms include fever, headache, rash and bodily pains; it lasts five to seven days.

Cardinal Malcolm Ranjith of Colombo had earlier made an appeal to all priests to make Jan. 22 a special day of prayer and action to help curtail the spread of dengue fever among parishioners.

Cardinal Ranjith himself organized voluntary cleaning programs at the parish level to clean schools, institutions and their surroundings to remove all factors which lead to the breeding of dengue-carrying mosquitoes.

The cardinal first cleaned the drainage near St. Lucia's Cathedral in Colombo and then joined the residents of Bloemendhal, providing garbage bags, broomsticks and shovels so they could also clean their lanes, roads and surroundings.

"We know that Colombo district is a crowded place and if the drainage system and garbage collection is not done properly then mosquitoes will breed," said Cardinal Ranjith. Student, Devan Fernando speaks about the importance of preventing the spread of dengue in Colombo on Jan. 22. (Photo by Niranjani Roland)

"I request all the ministers, parliamentarians and local council members to take a firm step to clean the drainage system and make sure the water flows well without stagnation and to maintain proper garbage disposal," he said.

Devan Fernando, 17, a prefect in a Catholic school in Colombo, joined with other prefects to fulfill his social responsibility.

"We cleaned the school premises, classrooms and removed all the garbage which leads to dengue spreading. One of our college friends has been admitted to the hospital to be treated for the disease," he said.

According to statistics from Sri Lanka's Epidemiology Unit, updated on Feb. 1, Colombo has the most cases of dengue in the country with 2,124 out of a total 7,742 reported in January. In 2016 there were 55,150 cases reported in Sri Lanka and 70 people died from the disease. Chief Medical Officer Doctor Ruwan Wijayamuni found 321 dengue breeding places during a recent inspection in the city.

President Maithripala Sirisena said on Jan. 31 that the government planned to introduce a new program to control the spread of dengue.