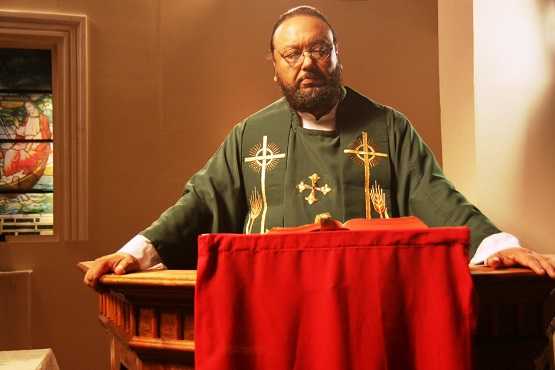 Alston Koch playing the lead role as Reverend Mathew Peiris in According to Mathew, a film that has upset church officials who worry it will give the wrong impression about Catholic priests. (Photo supplied)

Cardinal Malcolm Ranjith has disavowed the eagerly anticipated film According to Matthew that depicts the true story of an Anglican priest who killed two people.

Directed by veteran film-maker Chandran Rutnam the movie is scheduled for release in April. It will be in English and dubbed in Sinhala and Tamil.

It is about Anglican Father Mathew Peiris who had an affair with his secretary, murdered her husband Russel Ingram in 1978 and his own wife Eunica in 1979 by overdosing them with an anti-diabetic drug.

The priest and his lover were found guilty of the double murders and sentenced to death in 1984. However, Peiris was released in 1997 on a general amnesty.

"In a country where the majority of people are Buddhist or from other religions, this film might give the wrong impression about Catholics," said Cardinal Malcolm Ranjith of Colombo.

"In this film, the Anglican priest is dressed like any other priest and this might give the wrong message so we had to issue a statement to the media stating that Catholic priests don't get married and this film is not related to Catholicism or the Catholic church," said the cardinal.

He was also concerned about the title, According to Mathew even though the gospel writer's name is spelled with a double "t." It is a well-known phrase that is used in the liturgy and we have a problem in regards to that as well, the Cardinal Ranjith said. Director Chandran Rutnam with Bollywood actress Jacqueline Fernandez and actor Kian O'Grady on the set of According to Mathew, an upcoming movie about an Anglican priest who murdered two people. (Photo supplied)

However, all this is good advertising for filmmaker Rutnam. "It was also a good publicity for the film," said Rutnam, adding that this was the first time a film will be released in English and Sinhala in Sri Lanka.

"This is not a film against the Catholic or Anglican church. This is a film about an individual. I'm a God-fearing Christian myself and I would not insult the church or Christianity," said Rutnam.

Australia-based singer Alston Koch, a Sri Lankan Christian, who plays the role of Father Mathew said what is depicted in the film are historical facts and there is no reason to be worried.

"I believe we should not hide things underneath carpet. Christian or otherwise here is a story of a man who 'erred'  and was condemned by three Supreme Court judges," Koch said.