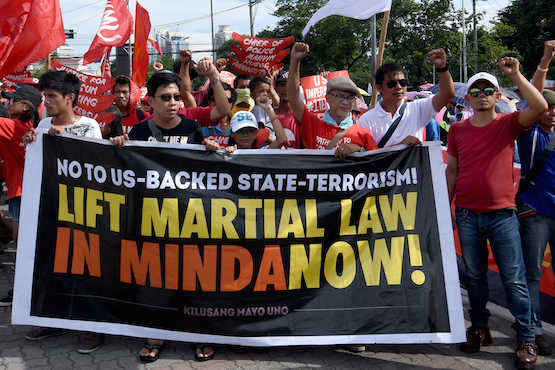 Activists call for the lifting of martial law in the southern Philippine region of Mindanao during a protest march in Manila on June 12, Independence Day. (Photo by Angie de Silva)

There is a threat to expand the coverage of martial law in the southern Philippine region of Mindanao to include other parts of the country. The country's president said he would declare martial law if he hears of just one militant in Metro Manila.

There is no room for complacency, especially as far as human rights defenders, activists and social movements are concerned. But activists are wondering why the public seems not to be worried about the threat of martial law, although it is understood that there are contending views, particularly on the need for the declaration to address the conflict in Mindanao.

Philippine history, however, should have generated a consciousness to resist military rule. Militarism has never sufficiently arrested conflicts and violence, even terrorism, in the past and should be scowled upon. Military responses often spawn violence that especially affects civilians.

But there seems to be something wrong with the Filipino peoples' collective memory making. It certainly doesn't help that liberal democrats who belong to or are allied with the oligarchy have glossed over this reckoning with the past to protect their political and economic interests.

With the ghosts of history being resurrected by President Rodrigo Duterte's declaration of military rule in Mindanao, we can't help but use the past and its lessons as a lens for current events, and compare Duterte with the dictator Ferdinand Marcos.

Marcos and Duterte are both popular and charismatic leaders. Marcos was the epitome of a firebrand, a captivating public speaker until the time when even his eloquence could no longer cover up the horrifying realities under his dictatorship.

Duterte, for his part, has been able to capture the adulation of the public with his misogynist language and vitriol. The base of Duterte's popular support is the lower and middle classes, the same section of society that supported Marcos in the early years of his rule.

Marcos used "peace and security" and "social stability" among the reasons for declaring martial law in 1972. His bogeymen at the time were the communists, or the "imminent danger" to the nation's existence from communist insurgency. It held ground, especially with the middle class, which has an aversion for unrest, criminality and unruly behavior.

Duterte's reason for declaring martial law in Mindanao is terrorism, which is not a recent phenomenon in the region, and in fact has long added to the complexity of the conflicts on the island. It is this same reason that the president will likely use to expand the coverage of martial law.

For us human rights defenders, there should be no prevarication when it comes to our position against military rule, whether the crisis is fabricated, perceived or real. In the past and as it is now, human rights is the first casualty under martial law.

History is now being used to dredge up distortions and biases that peace movements in Mindanao have painstakingly worked to diminish, if not end. The Christian-Muslim divide has been immediately played up by various interests, thus weakening efforts in the past to use dialogue and traditional means of resolving conflict.

Memory's frailty often makes it unreliable, but in recounting history and passing on to younger generations the narratives that comprise it, personal witnessing and reminiscences are very powerful. Historians will caution us that collective memory is not just about personal experiences. The process of collective memory making involves deepening our understanding and appreciation of historical events or periods through formal and other means of education.

Beyond personal memory, collective memory comes also from the documents and the narratives of the period being remembered and judged. In historical time, 30 years is insufficient for a collective memory-making process and can only render historical interpretation contentious.

Historians say that 50 years is the minimum time needed to evaluate historical events, not only for those who lived through these events but for those who have come after.

It will be 45 years this year since Marcos declared martial law. This puts the Filipino people at a critical juncture. It is now more urgent for us to fight revisionism and the interests behind the authoritarian rule of the past that have been emboldened under the new government.