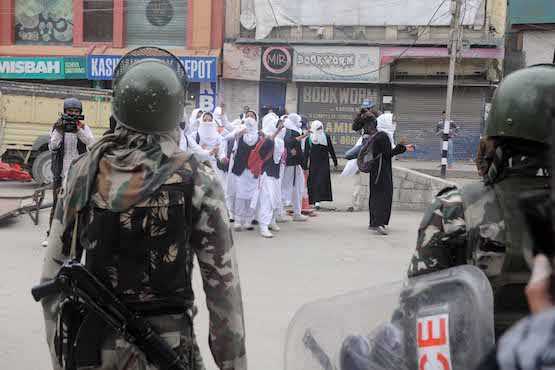 Female students protest in Srinagar, Jammu and Kashmir state. Clashes between students and security forces have surged since police raided a college and allegedly beat students on April 15. In a bid to quell the unrest, the authorities have banned social media in the region. (Photo by Umer Asif)

It has been nearly a month since Aadil Ashraf, a Kashmiri banker based in Dubai, has been able to see his mother who lives in the troubled north Indian region.

Since Ashraf left home five years ago to take a job in the Persian Gulf, his mother has only been able to see her son online via online video platform Skype. "My mother couldn't come to Dubai due to family issues but it was our daily routine to have a video chat," Ashraf told ucanews.com via phone from Dubai.

The routine was broken when authorities in Jammu and Kashmir state, India's only Muslim-majority region, banned 22 social media sites on April 27 in a bid to pacify tension.

Violent protests erupted after videos depicting abuse of Kashmiris by Indian security forces were circulated online. The state government said the ban was necessary because social media was being "misused by anti-national and antisocial elements."

Ashraf said a blanket ban on social media also hurts innocent people. "Why should my family bear the brunt? What about those who use social media to remain connected with family and friends? Why is the government punishing everyone for the sins of few?" he said.

According to a rough estimate, nearly 150,000 Kashmiris have migrated to the Gulf countries to find work. "All are young professionals with degrees in business management or engineering who have migrated outside the country and social media is an easy and cheap way to stay connected to their families," Ashraf said. Aabid Malik, currently in Dubai, has not been able to talk to his mother in Kashmir due to a social media ban in the restive region. (Photo by Umer Asif)

The ban is also proving harmful for those who have online businesses. For Aabid Malik, the ban has affected his travel agency because he used Facebook to promote his travel packages.

"The ban has caused a severe dent in my business. I couldn't afford to advertise in newspapers so social media was my only platform," Malik told ucanews.com.

Malik said Kashmir's long-running civil strife had already made it hard for startups to prosper.

"In 2016, businesses in Kashmir suffered six months of strikes. We blamed separatists but now it is the government who is destroying our livelihood," he added.

Sumair Syed, another startup owner from Kashmir said that he was looking for a new job. Syed, after working for a corporate house in Mumbai returned to Kashmir in 2016 to open an online fashion store.

"All the preparations were done. Social media was the main platform to inform people about the launch," he said.

Syed Idrees Ahmad, a government doctor, who works in one of the health centers in Srinagar, told ucanews.com that, besides business, the ban had affected the health sector.

"We used to spread awareness about immunization programs through social media. We used to make people aware about childcare too but we cannot do such things now," he said.

Caritas India have also found it difficult to work in Kashmir since the ban. Anjan Baig, a member of Caritas India in Srinagar, said they have not been able to communicate effectively with their local partners or their head office in New Delhi.

"We are not able to exchange emails. The documentation process has slowed. We are struggling to inform people about seminars and camps related to Caritas India's social service schemes through Facebook," he said. Sumar Sayed in an internet cafe in Srinagar, Kashmir. Sayed's business has been hit by a social media ban in the region after student protesters organized demonstrations via apps like WhatsApp. (Photo by Umer Asif)

Kashmir Police Chief S. P. Vaid said one of the reasons behind the ban is that militants have been provoking youth riots via social media platforms like WhatsApp.

"Social media is highly misused in these situations. Militants in Pakistan, across the border, send information about the site and time of the encounter. They mislead the youth in Kashmir so that innocent people come in the line of fire and cause more casualties," Vaid said.

Inspector General of Police, S. J. M. Gilani said the decision to continue or end the ban will be taken after reviewing the situation. "We will discuss the strategy and will review the impact of the ban. The decision will probably be taken by the end of May," Gilani said.

Pranesh Prakash, policy director at the Center for Internet and Society, issued a statement calling the ban a "blow to freedom of speech" and "legally unprecedented in India."

The treatment being meted out to the civilian population of Kashmir for raising a voice against human rights abuses in governance and is unprecedented in the state, Abdullah said.

"The internet is banned, TV channels are banned and now social media. It is pathetic and gruesome," Mirwaiz told ucanews.com.