Coal will 'destroy' the Philippines 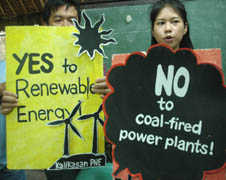 Environmentalists call for an end to coal-fired power plants

A nun is urging authorities in a southern Philippines city to reject a proposed 150-megawatt coal-fired power plant, branding the fossil fuel a “monster that will destroy” the country. Coal is a “very damaging mineral” when burnt. “I don’t understand why anyone would want to implement such a thing,” said Sister Concepcion Gasang, from the Missionaries of the Assumption told ucanews.com in Davao. “We affirm our strong commitment to pursue the values of ecozoic living and learning. We say no to coal because it is another monster that will destroy our country,” said Sister Gasang, who is also president of Assumption College in Davao. Environmental groups also oppose the plan and accuse city authorities of going back on previous initiatives aimed at protecting citizens’ health and the environment. Jean Lindo, convener from the Network Opposed to Coal-Davao, says local officials should drop the plans for the power plant to be built by Aboitiz Power Corp, a multi-billion peso energy company. “We are known for our ‘No Smoking’ ordinance that benefited many of our residents, so why push for coal which is more deadly than tobacco?” Lindo asked. Local officials have expressed support for the plant because of increasing demand for power from industry. Vicente Lao, head of the Mindanao Business Council, said Mindanao manufacturers and processing plants want more power to keep up with production. Anti-coal activists, however, say the government can always choose renewable energy to meet increased demand. Government officials and the people should “move forward to discussing pro-poor and pro-people alternatives” to coal, said Francis Morales another convenor from the anti-coal group. Anti-coal activists in the city are compiling scientific evidence to prove that coal is a threat to the environment and to the health of people. Related reports Bishop joins celebrities in anti-coal protest Philippine church bells toll for ‘climate justice’ PM12709.1635