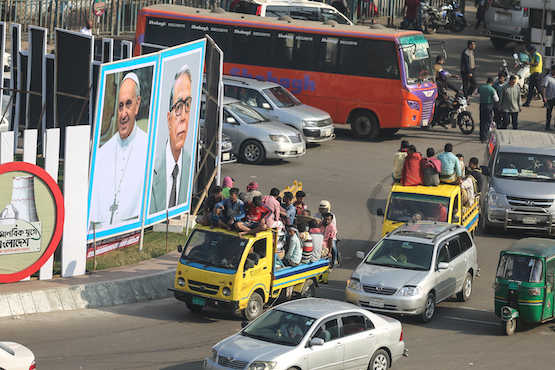 Huge posters with the image of Pope Francis have appeared around Dhaka, capital of Bangladesh, on the eve of the pontiff’s visit to the South Asian country. (ucanews.com photo)

Aside from the much talked about plight of the Rohingya — climate change, modern-day slavery, religious persecution, including attacks on Christians, are issues that await Pope Francis when he visits Bangladesh this weekend.

Cardinal Patrick D'Rozario of Dhaka has expressed confidence that the pontiff will speak not only about the Rohingya refugees who have been living in dire conditions in the southern part of the country, but also about the state of the environment.

Bangladesh, a low-lying riverine country, remains among the nations most affected by climate change.

It has been ranked by the Global Climate Risk Index sixth among countries most affected by changing weather patterns from 1997 to 2016.

"I hope that he will address climate change issues," said Cardinal D'Rozario during an interview prior to the pope's visit to Dhaka. "I am sure Pope Francis will appreciate all the steps that have been taken by Bangladesh to fight climate change."

The Dhaka prelate said he expects the pope to express his love for Bangladesh, especially for poor workers who suffer under what the pontiff described as "modern slavery."

Pope Francis condemned "slave labor" after the collapse of a Bangladesh garment factory in 2013 that killed more than 1,100 workers.

Bangladesh has also witnessed in recent years a rising number of attacks against religious minorities, including Hindus and Christians, starting in 2001 when a bomb explosion at a Catholic church killed nine people.

In 2014, at least eight Catholics were reported injured after their homes were set on fire. Later that year, several nuns and a priest were beaten up when a mob attacked a Catholic convent. In 2015, a priest was stabbed during an Easter service.

Only last year, a Catholic church and a convent were raided by a group of men who beat the nuns. A July 2016 militant attack on a cafe  frequented by foreigners in Dhaka left 22 people dead.

And days before the pope's visit, a priest engaged in preparations for the papal visit went missing.

"We have high hopes he will talk about all these issues, which [are] very real. We truly hope he will respond," said Cardinal D'Rozario in a media interview.

There is much anticipation about what Pope Francis will say especially when he speaks before an expected crowd of 80,000 people at Suhrawardy Uddyan, a colonial-era park in the capital, on Dec. 1.

Pope Francis' three-day visit to Bangladesh will be the first since the 1986 trip of Pope John Paul II.

Christians make up less than 0.5 percent of Bangladesh's 165 million predominantly Muslim population. About 12 percent of the people are Hindus, and at least one percent is Buddhists.