Climate of fear forces Indian Christians to document the faithful 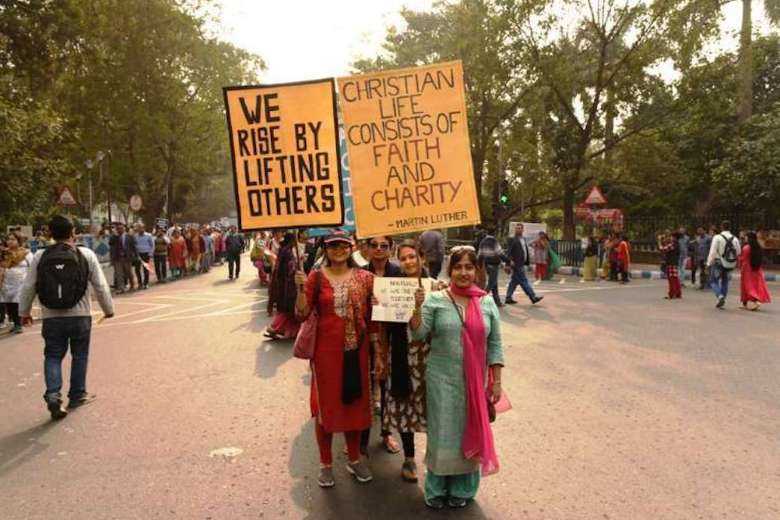 Indian Christians stage a protest in Kolkata in January 2020 against the violation of their religious and social rights by governments and groups who have been openly threatening minorities. (Photo: AFP)

“We are now living in a very difficult situation where a worship service in a church is being portrayed as religious conversion and false cases are registered against ministers,” said Pastor Biju Thomas.

Thomas, a minister of the Protestant Church of God, escaped arrest on a charge of religious conversion on Oct. 31 after a Hindu group’s plot to trap him was foiled.

Some 65 believers were gathered in a church in Satna district headquarters for their routine Sunday worship. As they were praying, one youth joined the service. The youth, an agent of the Hindu group, mistakenly entered the area where females were gathered.

Another man entered the church, apparently as part of the trap, said Pastor Thomas. Soon, he added, a police team accompanied by right-wing Hindu activists gathered outside the church and began to accuse him of holding illegal religious conversions.

The youth told police he was brought to the church for conversion, but members of the congregation denied the claim and said nobody knew him and he was an outsider.

“The believers also said they had documented the details of each person attending the service in compliance with Covid-19 protocols. Soon the youth slipped away from the crowd and the other man followed suit,” said Pastor Thomas.

The Hindu activists still insisted on registering a case against the pastor and others for violating Madhya Pradesh’s anti-conversion law.

In January, the state amended its four-decades-old anti-conversion law by adding stringent provisions such as jail terms of up to 10 years for conversion through allurement, force and coercion among other means.

However, the law allows conversion of people to the majority Hindu religion from other religions as it is treated as Ghar Vapsi (home returning).

On Nov. 1, Hindu activists staged a protest in front of Kolgawan police station demanding action against Pastor Thomas and others before they were dispersed by police.

Reports suggested that police registered a case against Pastor Thomas and five others, but when UCA News contacted police they refused to disclose any details and disconnected the call.

“I am still not sure if I am charged with provisions of the anti-conversion law,” Pastor Thomas told UCA News.

“This incident has taught us a lesson that we need to document everyone who attends services in churches or other prayer gatherings.

“We will also have to restrain the entry of outsiders to church services, especially those we do not identify, failing which anybody can trap us in false cases.”

The new anti-conversion law is a weapon to accuse anyone of conversion even without prime facie evidence, he added.

Pastor Vinod Karvel was not as lucky as Pastor Thomas as he had to spend 16 days in jail after he was trapped in a false conversion case in Amar Patan, also in Satna district.

“I and another pastor were arrested on Sept. 5 from the house of a believer where we were invited for prayer,” Pastor Karvel told UCA News.

“As we were about to leave the house, some 30 right-wing Hindu activists accompanied by police beat us up and we were arrested accused of indulging in religious conversion.”

The house owner told police that they were at his home at his invitation and denied the conversion charge.

Under influence from the Hindu activists, the police registered a fake case against both pastors and they were sent to jail. Both are now out on bail after the house owner filed an affidavit dismissing the false claim of the police.

“It is wise to collect signed documents from believers before admitting them to any prayer service to escape fake conversion cases,” Pastor Karvel said.

Madhya Pradesh has witnessed several similar incidents since the implementation of the amended anti-conversion law.

Nine Christians were arrested at a prayer service in January after Hindu activists accused them of religious conversion. They barged into the prayer gathering and created chaos.

A Christian marriage reception in Indore was disrupted over a false charge that the bride was a Hindu who was converted to Christianity.

“This is a new strategy to terrorize us,” Father Maria Stephen, the public relations officer of the Catholic Church in Madhya Pradesh, told UCA News.

“After the new anti-conversion law came into force, Christians and Muslims have become more vulnerable and they can be trapped anytime, anywhere without one iota of evidence.

“It is true the state has had an anti-conversion law since 1986, but until now there has not been a single conviction. Our people are harassed with this law and Christian missionaries are forced to stay in jail for weeks in false cases of conversion.”

The priest agreed with the pastors. “It is high time that we document our properties and our people attending services, especially in small churches,” he said.

Christians make up less than 1 percent of Madhya Pradesh’s population of more than 71 million, with Hindus comprising over 80 percent.