The pain brought by the pandemic has been bad, but the suffering global warming will bring threatens to be catastrophic 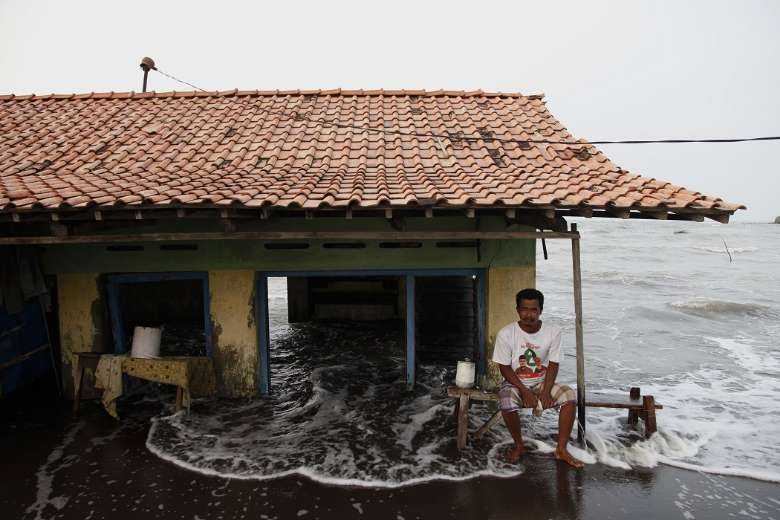 A man sits in front of his house destroyed by sea waves in Pekalongan city, Central Java, on June 3. According to the Indonesian Ministry of Energy and Mineral Resources, Pekalongan is experiencing land subsidence of 6 centimeters per year caused by massive use of groundwater and global climate change. (Photo: AFP)

We have the science and technology to halt global warming, but political will among world leaders and decision-makers to execute climate initiatives effectively is lacking.

UN Secretary-General Antonio Guterres has said as such on several occasions, including a climate change forum at the end of 2019, just as Covid-19 started to conquer the world.

The world’s unhealthy behavior toward nature and its unpreparedness to face the tragic consequences of global warming are a much worse prospect than the current pandemic.

As the signs of recovery begin to appear thanks to vaccinations, the UN chief’s call for a stronger political will to battle climate change needs to reverberate louder than before.

However, the early stages of post-pandemic recovery may not have an immediate impact on climate change drives. It’s particularly a concern among developing nations, including Indonesia, as they direct all available resources to resuscitate economies devastated by the pandemic.

Indonesia, the world’s fourth most populous nation with 270 million people, is struggling hard with a high level of poverty, exacerbated by the pandemic

A recent International Labour Organization study concluded that the pandemic alone had caused the loss of 144 million jobs, on top of pre-pandemic unemployment.

Despite around 100 million jobs being created this year, there will still be 205 million unemployed around the world until next year. The ILO estimates that it will take at least until 2023 to restore the jobs that were lost.

The likely result will therefore be less attention given to climate change mitigation efforts.

Indonesia, the world’s fourth most populous nation with 270 million people, is struggling hard with a high level of poverty, exacerbated by the pandemic.

Around 27.5 million Indonesians (about 10 percent of the population) are in poverty, according to the public statistics agency, with the pandemic adding 3.5 million unemployed to take the total number of jobless to 29.12 million.

As such, the government has pledged to focus on economic recovery, which if not handled properly could stir up political turmoil.

The Indonesian government, like many others, is racing against time to salvage the economy and restore lost jobs. It will take time and financial support, which will mean compromising the climate change agenda.

This is extremely important for Indonesia, which faces grave threats from climate change, such as rising sea levels — which is exacerbating the gradual sinking of the northern part of Jakarta — drought, forest fires and floods.

Some important steps toward that goal have been taken, such as by hosting a UN climate change conference and formulating the Bali Action Plan in 2007 that focused on climate mitigation, adaptation, technology and financial resources and investment.

It is here that political will and determination in government is required at all levels, not just central government

The roadmap has become a unifying platform that sets out long-term cooperation in which countries collectively accept the need for deep cuts in greenhouse gas emissions.

Indonesia under President Joko Widodo is continuing this commitment to be a good partner in the climate change battle.

Environment and Forestry Minister Sity Nurbaya assured Indonesia’s commitment when she met Alok Sharma, a British politician and president of COP-26, in May in Jakarta in preparation for the upcoming climate summit in Glasgow, Scotland.

She said Indonesia will achieve carbon neutrality by 2030 in the forest sector, with a storage capacity of as much as 140 million tons of carbon.

However, she was uncertain about reducing carbon emissions in the energy sector, as it requires large investment and technology, international technical cooperation and support from the private sector.

It is here that political will and determination in government is required at all levels, not just central government. At a provincial and more local level, this will is lacking.

During a recent climate change forum organized by the US embassy and Foreign Policy Community of Indonesia, Jakarta governor Anies Baswedan said his administration was the first and only local government in Indonesia to take climate change seriously.

Indonesia needs to work harder, unite the whole of society and place climate change high on the political agenda. This can be done, for instance, by making it an election issue or when appointing high-ranking officials to ministries and state-owned enterprises.

The door is open for Catholics to make the climate crisis an electoral issue by using Pope Francis’ Laudato Si’ encyclical on the environment as a framework to turn voters into decision-makers.

Ahead of and during elections, the Church needs to campaign against politicians who have businesses that destroy the environment or who have connections with multinational corporations that are environmentally unfriendly.

This issue needs to be added to and given equal prominence with existing church campaigns against corruption or extremism.

By cooperating with other religious organizations, non-profit groups and academia, the Church can campaign against coal as an energy source and deforestation, two of the main causes of air and water pollution and climate change.

The climate crisis should become Indonesia’s main political concern as global warming will bring suffering far worse than the pandemic has wrought.