Climate change or climate disaster?
Who will ever assert that we always made the right choices over the environment? The last week of June is usually a time dedicated to the study of climate change in the light of Pope Francis’ seminal 2015 encyclical, Laudato Si'.

This year’s concern focuses on the marine life of the seas and the oceans, and whatever can help in promoting the biodiversity thereof.

The few reflections which follow will therefore talk of water and its impact on our lives and livelihoods.

The first thing which needs to be said is that with water “climate change” is actually imminent “climate disaster.”

It is indeed hard to understand why we do not seem to grasp the immensity and the urgency of the changes already unfolding around us, and why many of us seem to feel that because we are better placed, we can escape the worst environmental disasters.

But this is not borne out by the facts: the floods that hit Mumbai in 2005, and Chennai in 2015, affected everyone in those Indian cities — rich and poor, vulnerable and powerful. Modern urban civilization enmeshes everyone in its coils, and the more sophisticated our life becomes, the more precarious it also is.

If we consider the location of those who are most under threat from the changes taking place across the planet, the largest number of potential victims are in Asia

Today global warming is a universal concern — and this is not something to be solved by having better air-conditioners.

Global warming is melting the polar ice caps, raising the levels of the seas, inundating many of our coastal cities, creating conditions of drought and famine, and irrevocably changing the politics of our countries.

Yet this barely figures on the agenda of governments. We live in a state of ignorance and denial.

Asia is central to the effects of global warming and is so because of its numbers. If we consider the location of those who are most under threat from the changes taking place across the planet, the largest number of potential victims are in Asia.

Take for example the Bengal Delta — Bangladesh and much of West Bengal — one of the most densely populated parts of the world, with more than 250 million people crammed into an area just a quarter the size of Nigeria.

The flood plains of Bengal are not likely to be submerged as quickly or as completely as the Pacific island of Tuvalu. But the population of Tuvalu is much less than 10,000, whereas the partial inundation of Bhola island in Bangladesh led to the displacement of 500,000 people.

Because of the density of its population, some of the world’s worst environmental disasters have occurred in the Bengal Delta.

A rise in just two meters of the sea level could lead to the loss of some 6,000 square kilometers in the most fertile low-lying areas, such as the Sunderbans. This in turn would compel millions to emigrate out of danger, to higher lands. And there is no government — whether of India or of Bangladesh — which could stem such a tidal wave of refugees.

As the Himalayan glaciers continue to melt, the variations in the flow of the rivers on the plains will increase, with unprecedented lows in the dry season and massive floods in the summer

Thus the ongoing changes in climate pose a dire threat not just to coastal areas but also to the interior of the continent where millions of lives and livelihoods are already in jeopardy because of periodic drought, flooding and extreme weather events.

Bad as these conditions are, they are dwarfed by Asia’s accelerating water crises. Most of the rivers that sustain the populations of China, South Asia and Southeast Asia all rise in the Himalayas or in Tibet. The waters that are stored there in the form of accumulations of glacial ice nourish 47 percent of the world’s population.

But this region is warming twice as fast as the global rate, and by some estimates one third will disappear by 2050.

As the Himalayan glaciers continue to melt, the variations in the flow of the rivers on the plains will increase, with unprecedented lows in the dry season and massive floods in the summer. The livelihoods of half a billion people in South Asia are at risk.

Environmental issues have always been seen in an economic framework, with a cost-benefit analysis. International governments see it in this way and impose their perspective on the rest. Happily, many activists are breaking with this position and adopting a more moral point of view.

We know that Mahatma Gandhi, the father of the Indian nation, invested himself, body and soul, in an effort to prevent India from adopting the Western industrial model for the country's economy. However, he was unsuccessful.

But when we look at our country’s path over the last 75 years, when we consider the stark inequalities of education, income and opportunity spread over the vast masses of this land, and most of all when we take stock of the looming ecological disasters which await us, who except the most stupid would ever assert that we always made the right choices? 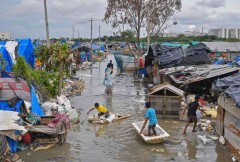