Church and religious have a key role to fulfill in opposing dictatorship, says former priest 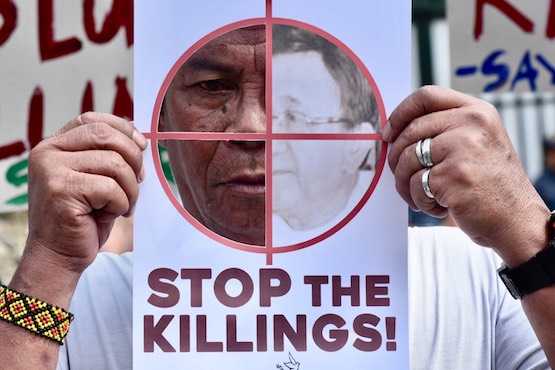 Protests respond to President Rodrigo Duterte's move to declare underground communists "terrorists" and to include legal activists in his crackdown. It follows the killing of Father Marcelito Paez Dec.4, who was gunned down after facilitating the release of a political detainee. (Photo by Angie de Silva)

The murder on Dec. 4 of retired priest Father Marcelito Paez in the Philippines came a day after Catholic officials met to prepare for an expected crackdown on activists.

Fr. Paez was shot in landlocked Nueva Ecija Province on the main island of Luzon hours after helping secure the release of a political prisoner.

Redemptorist Father Oliver Castor, a spokesman for the Rural Missionaries of the Philippines (RMP), said the meeting the day before included various church organizations.

Recent experiences of harassment were shared.

The RMP, which works mostly with farmer and indigenous communities, expressed concern over threats from President Rodrigo Duterte against alleged "front organizations" for communists.

"But we never thought it would hit us so close to home, so fast."

Ucanews interviewed Fr. Castor on Dec. 5, an hour before Duterte declared the Communist Party of the Philippines (CPP), the New People's Army (NPA) and the National Democratic Front (NDF) as "terrorist" organizations.

In a radio interview, Arevalo mentioned the Bayan Muna, which ran in elections for Congress and the Bagong Alyansang Makabayan and is a legal umbrella of progressive mass organizations.

The Armed Forces spokesman even targeted Akbayan, a political party linked to the government of former President Beningo Aquino.

"We have received information on the aid they are providing," Arevalo said.

Church a shield to oppressed

The RMP said the killing of Fr. Paez was a brutal act against the Catholic Church and faithful aimed at sowing terror among political dissidents opposed to extra-judicial killings and other human rights abuses.

Fr. Castor said members of religious groups nationwide are vulnerable to attacks because churches are seen as sanctuaries, especially for the poorest of the poor.

"It is not the mass leaders they want most," the priest told ucanews.com.

Security forces would single out low-profile leaders with grassroots links.

He added that Fr. Paez fitted the target profile.

"He was well loved and a very hard worker with the ability to unite different communities and sectors," Fr. Castor said.

The Iglesia Filipina Independiente (IFI), which spit from the Catholic Church more than a century ago, has also been preparing for the announced crackdown.

Clergy live with tribes for weeks at a time to ensure harvests and planting seasons are not disrupted by military or paramilitary forces.

"But we need to tighten safeguards because of the upsurge in security risks."

Police and vigilantes, that rights groups claim to be state agents, have also killed thousands of people branded as drug addicts or dealers.

Duterte's latest move against dissent has been met by protests.

For example, activists rallied in front of the nation's Armed Forces headquarters.

And more than a hundred seminarians, nuns and lay leaders protested following a forum on the scuttled peace talks.

Luis Jalandoni is retired chairperson of the negotiating panel of the NDF, which represents a wide range of leftist and progressive groups.

"I believe that church and religious have a key role to fulfill in opposing dictatorship," Jalandoni, a former priest, told ucanews.com

"They fought heart and soul through many years against the Marcos dictatorship, helping the people in finally overthrowing it.

"They immersed themselves in the people's struggle and gave all kinds of support.

They gave safe haven to wanted activists, cared for the victims of the military and their families, and brought wounded persons to supportive doctors."

Some had joined the revolutionary underground or fought and died with the New People's Army.

The Communist Party of the Philippines has 70,000 members nationwide, according to its officials.

Its armed wing, the NPA, has 4,000 armed guerrillas, according to government estimates. 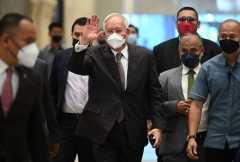