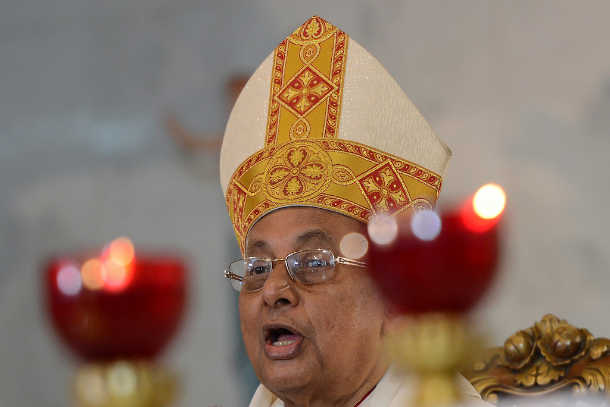 Cardinal Malcolm Ranjith has called on Sri Lankans to act intelligently when they select political leaders while urging religious leaders to stay out of politics.

"If the country is to be built, intellectuals should be brought into politics," he told a function at the University of Ruhuna on Nov. 30.

"Ministers who ruled the country in the past were always committed to spiritual development and at the same time economic development."

Sri Lanka will hold a parliamentary election next year after recently having a presidential election in which Gotabaya Rajapaksa was elected.

Cardinal Ranjith, who is the archbishop of Colombo, said Sri Lanka needs to move forward in the world.

"We must select specialists who have been trained by intellectuals on a spiritual basis," the 72-year-old cardinal said.

Cardinal Ranjith added that political leaders should be elected to ensure justice, fairness and prominence for the country.

"If religious leaders get on the political stage, it will be a disaster for the country," he said. “As clergy, we should give our leadership outside the political arena."

Sri Lanka’s education system must put an end to making divisions according to religion, nationality, language, class and other social stratifications, the cardinal said, adding that a common legal framework that treats everyone equally must be established.

Cardinal Ranjith has claimed that there is a clear attempt to hide the truth as all those responsible have not still been brought before a court. If intelligence information had been disseminated before the attacks, church officials could have cancelled the ill-fated April 21 services.

The cardinal said he no longer has faith that justice will be done to victims in spite of repeated requests to reveal the truth behind the attacks.

The presidential election campaign focused on national security in the wake of the atrocity.

President Rajapaksa has pledged to appoint an independent commission under his leadership to investigate the attacks and help victims.

Cardinal Ranjith asked him to take legal action against those who were responsible for the massacre irrespective of their social status, ethnicity or religion.

"We can't say a proper investigation has been carried out to find those responsible for the Easter attacks. They have swept everything under the carpet," he said.